As Curbed noted, the Cooper Square Hotel is throwing a bash tonight to unveil its new graffiti mural...

Here's what the mural looked like as of Saturday... 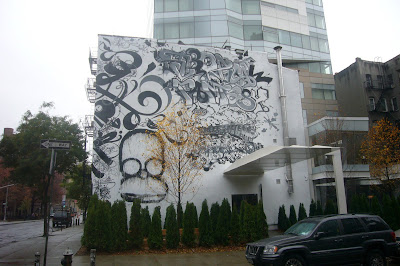 And we did a little research to learn more about the origins of the Homer Simpson tribute.

Also, for the record, I want to be clear that I really like the work of the four graffiti artists -- Joyce Pensato, Nick 1, Vizie and Shinique Smith -- who were hired to create this mural. And I'm happy that they have such a high-profile canvas to show their work. My problem is with the Cooper Square Hotel's lame attempt to suddenly try to fit into the neighborhood. As the Post reported:

Klus Ortleib, the hotel's managing partner, wants the place to fit in with the edgy local art scene. "When I came up with the idea, people said I was crazy," he said.

Anyway! We assume that the mural is finished. The bushes that were removed to make way for the crane... 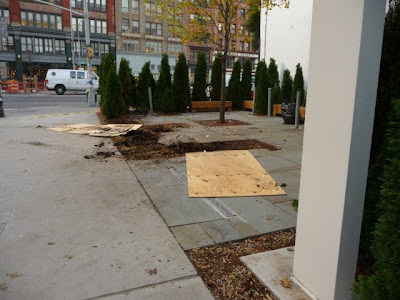 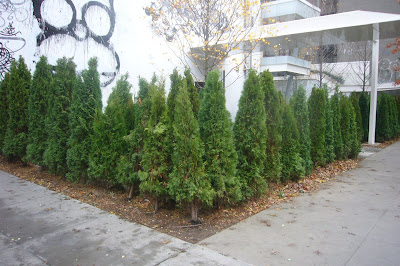 Sort of. I'm not much of a gardener, but I always thought plant life did better in the ground if you first took off the burlap around its roots... 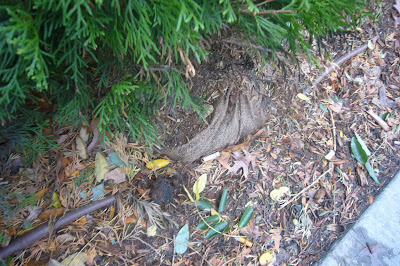 Previously.
Posted by Grieve at 6:47 AM

Nothing screams edginess like a little hedge of perfectly manicured Christmas trees.

Shoulda had Mosaic Man go to town on this place...

I'm pretty sure the burlap is supposed to be left on there and as the tree grows the burlap degrades and the roots expand out.

QUALITY I really like this blog, now im not 1 for adding links in my replies but I feel this is a great exception, I read a story like this about graffiti artist Darren Cullen on http://www.hire-a-graffiti-artist.co.uk/ he also works with another bunch of graffiti artists called the Graffiti Kings.