Nothing compares 2 U?: St Mark's karaoke/billiards/gourmet deli palace gets a sign 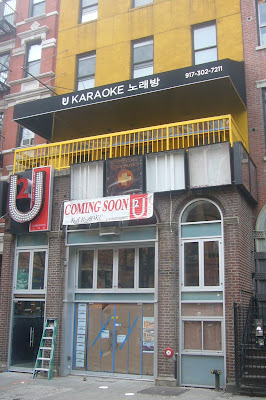 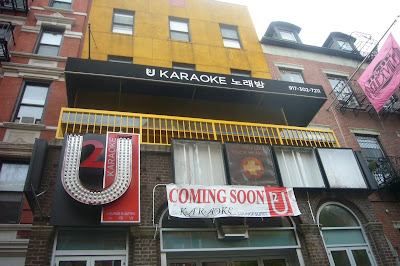 ...and it's rather difficult to read...looks like some rejected concepts from U2's PopLife tour... 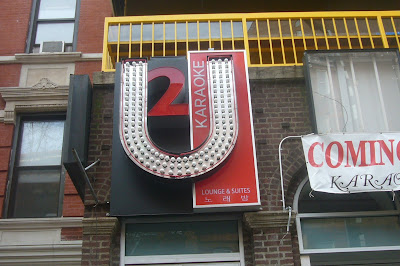 Previously on EV Grieve:
What we now know about the karaoke empire on St. Mark's Place

Coming soon: A gourmet deli to go with your karaoke on St. Mark's Place

Karaoke taking over Mondo Kim's space
Posted by Grieve at 6:53 AM

Do people really go to Karaoke bars? Isn't that the musical equivalent of saying you like bedazzle things in your spare time?

The Korean words on the awning (and garish sign...can't wait to see that 'U' lit up) says "noh-dae bahng", which translates literally to "singing room". Korean noh-dae bahngs (karaoke places) tend to be a collection of private rooms for singing, drinking, and noshing. (being Korean myself, I may or may not have visited a few in my youth...)

P.S. I miss Mondo Kim's! (and their surly clerks)

Thanks for the comments, T.E.V.B. I'm looking forward to seeing that U lit up myself! Garish is exactly the right word for it...