At Nevada Smith's, trouble in soccer paradise after a popular bartender is fired

Last Wednesday, soccer mecca Nevada Smith's on Third Avenue was shuttered for a day due to alleged underage drinking... The bar reopened Thursday. 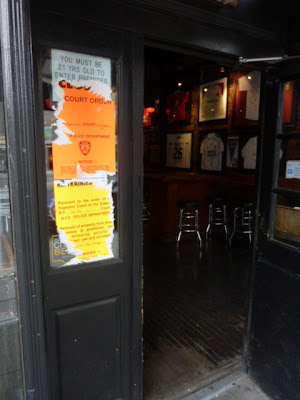 Meanwhile, a Nevada Smith's regular shared what has been happening there of late... Kieron Slattery, a longtime popular bartender at Nevada Smith's, was fired by Paddy, one of the two owners. As the regular said, Keiron was fired because he refused to pay the fine the bar incurred -- upwards of $2,500. According to one side of the story, Paddy was passing the fine on to the bartenders who were on duty when the summonses were issued. Making matters worse, Kieron was arrested for trespassing when he showed up for work the next day. (One person familiar with the situation said that he refused to come out from behind the bar when asked.)

Now, as a result of Kieron's departure, several longtime regulars are boycotting Nevada Smith's, choosing to watch games at venues such as Central Bar on Ninth Street instead. [Update: Bartender Ken Foley was also fired...]

There is also a Facebook page created for Slattery titled "Pay the Fine! Not Fine the Workers!"

There's an alternate take on all this in a post at the New York Gooners.

Bottom line right now: There's a lot of tension at Nevada Smith's as all this is getting worked out... in addition, those rumors persist that the bar will be moving to a larger location nearby ... and that the bar's current location, 74 Third Ave., will be razed...

Update: Sign a petition to reinstate the two bartenders here.
Posted by Grieve at 7:00 AM

I don;t understand why anyone would choose to watch soccer at Nevada Smith's. They charge a $20 entrance fee, which means if you go to watch one game each weekend you've already spent the equivalent of a monthly cable bill (not including the beer). As a British football obsessive I much prefer to watch the beautiful game from the comfort of my own home.

There is rarely a $20 cover. Maybe only international friendlies.

They only charge for games that are PPV (which happens maybe once every six months, as a result of foreign football associations wanting to make extra cash in shady fashion). Weekly EPL matches are free, even the ones airing on pay channels like Setanta or Fox Soccer Plus.

i concur. nevada smith's is overrated when it comes to watching soccer...errr... football.

it used to be free, then they started charging $20. central bar is a better alternative. so is st. dymphna's, albeit tiny. and there are others: floyd's and eammon doran's in brooklyn. fiddlestick's in the west village. local pubs in woodside such as sean og's...

still it is bad timing for nevada smith's, with the champions league, the premiere league on the line, and the upcoming world cup.

i'd like to see nevada smith's stay there rather than a bank, starbucks, nyu office, etc., or turned into another fratboy bar (much like what's going to happen to the telephone bar), nonetheless. it is, and has been, an east village staple.

You are so wrong: Nevada Smith's NEVER charged any amount to get inside to watch any Football Match!

The amount charged was always done by Setanta, they had their people charging at the door, otherwise they would've refused for Nevadas to show the Match! Since Setanta is done with Football anyways, there won't be anymore charges at Nevadas.

And to not get this wrong: I am not an employee at NS, I am a regular who enjoys watching games at Nevadas and even more: Loves the staff, since they are sincere, honest people!

James, I don't know when you were ever charged a fee at the door, but if that was practice, it's not anymore. I once, 2 seasons ago, had to pay a $10 cover for FA Cup matches, which were only shown on pay-per-view, so it was cheaper than getting it at home anyway. As a true "British football obsessive," you would know that the atmosphere at Nevadas is second only to being at the match itself, which is why I and so many others are regulars there.

Additionally, the "alternate take" on the NY Gooners site was posted by an employee (read: "lackey") of Paddy's, and cannot be trusted as being anything more than spin for the owner. The rumors of a move to a larger location have been circulating for years now... everything I've heard is that the city has long been attempting to delay such a move.

You've clearly not been to Nevada Smiths for a Premier League match. There is no cover.

if they have to pay setanta or somebody the fee to get the game (usually in the thousands of dollars) then they charge a gate. If it's on their package, then there's no fee. I've never paid a fee for EPL, MLS or La Liga games. I did for Euro, though, but that's because the games cost them a pretty penny to get. Same With rugby.

They were charging for some of the Eurocup matches a few years back, but that's all I can remember, and obviously for fights that are on PPV. Though it costs bars an arm and a leg to play those. But, yea, never for EPL.

Any more light that can be shed on this "rumor" of the bar being razed? The same family owns that entire block, from the movie theater to the parking lot.

@esquared, I cannot disagree with you more. Nevadas is the only place in the city with any sort of atmosphere. For a real football fan (and it's football, not soccer), there is no other destination. Central Bar is tame, and Floyds is where Tottenham fans go to watch their matches, which makes it unacceptable for any self-respecting football fan.

I don't know where all this talk of $20 covers started, but they've only ever charged for PPV matches, which cost plenty anyway. In any case, every English fan I've met has been blown away by the atmosphere and knowledge of the fans at NS. So unless you want a place to watch "soccer," nevadas is the place to go.

We've now launched a petition which is from multiple supporter clubs in NYC.

I think people should calm down. As far as I know There are Doorman at Nevadas, but supposedly the infractions happened on quiet nights, Monday & Tuesday nights, when business was slow, and the bartenders personally did not card undercover, underage police cadet.Not once but three times. Also no bartenders there to date have paid any fines!! The bar has paid it. People should get a life and comment on more important things like poverty, hunger & the state of the country!!

The bartender, our friend was fired. Let us fight whatever battles we want. End of.

To the devoted regulars of Nevada Smith's: I never meant to bad-mouth what is clearly a much-loved establishment.

To clarify: I never paid a $20 entrance fee -- when it was suggested to me at the door I walked away.

Also, I don't doubt that the atmosphere at Nevada's is at times palpable. Yet at ten o'clock on a Saturday morning I'm invariably still working on my second cup of coffee. It takes several hours (and several more pints) before I feel the urge to jostle shoulders with United fans in AIG-emblazoned replica shirts.

The bar is nothing without Ken and Kieron.