Concert to benefit Haiti this Saturday at the Second Street Cathedral 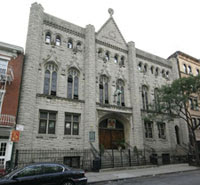 Father Calin passed along the following information to us...

As part of an ongoing effort to help the suffering and the homeless of Haiti, the Second Street Cathedral will host a Benefit Concert on Saturday, March 20 at 7:30 p.m. All proceeds from the concert will go to aid Haiti’s people in their hour of need. A Vespers service with special petitions for the Haitian people and the relief workers will precede the concert.

This event features the world premier of a new Passion Cantata incorporating hymns of the Crucifixion from Good Friday. The music is based on ancient Russian and Georgian chant, sung a cappella in English. The Cantata was written by composer Robert Sirico specifically for this occasion. The concert will be directed by Juilliard-trained musician Nicholas Reeves, and performed by a select chamber choir formed for this concert.

Second Street Cathedral has a history of supporting the community through music. After 9/11, the parish raised over $20,000 for local firefighters through a similar concert and campaign.

To ensure this event is just as successful, we are reaching out to everyone in our community and neighbors of all faiths to come hear the prayers for Haiti. Concertgoers will be asked for a $20 donation, 100% of which will go to the people of Haiti.

WHAT: Passion Cantata: Concert to Benefit the People of Haiti
WHEN: Saturday, March 20 2010 (5:30 Vespers service; 7:30 Concert)
WHERE: Russian Orthodox Cathedral of the Holy Virgin Protection
59 East Second Street (between First & Second Avenues)
Posted by Grieve at 6:30 AM