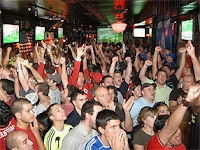 As a followup to today's post on Nevada Smith's.... loyal supporters of the two bartenders who were fired now have an online petition... You can access it here.

This letter is a response on behalf of a group of loyal Nevada Smiths customers regarding the incident that happened last week, where your bar was closed and fined for being found guilty of serving alcohol to underage customers, and the subsequent events that transpired, seeing Kieron and Ken fired, and Kieron arrested and placed in jail.

We would like to express the shock and ill feeling we have over your behavior in dealing with the situation. Nevadas has built its reputation and strong customer base through the hard work of the likes of two individuals in question. These men are what Nevadas is all about and to take them out of the equation will leave a gaping hole in the establishment which will be impossible to fill.

You will find below the signatures from the people who want Kieron Slattery and Ken Foley to be reinstated as bartenders at Nevada Smiths. If they are not, we will stand together in taking our business elsewhere.

This is so dumb. The bartender shouldn't have served underage patrons, that is why the bartender is supposed to pay the fine. Stop whining. Why should the bar owners have to pay the fee for this lady?

I'm sorry but there is no way I can agree with you. Nevada Smith's is a successful bar, one that can afford a door man all the time instead of the "whenever we feel like it" approach they have. It's unrealistic to expect a bartender to man the bar, serve a bunch of boisterous patrons, and watch for underage drinks. That's setting up the bartenders for failure. Just keep the doorman at all times and you solve this problem.

i'm gonna have to agree with the doorman approach - if you've ever worked in a bar you know how incredibly difficult it is to ID everyone that walks into the establishment whilst tending to the bar, customers and everything else that occurs.