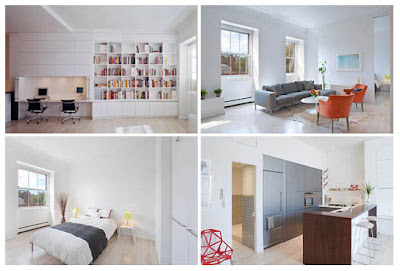 Back in October, Curbed featured a recently renovated one-bedroom home in the Christodora House on Avenue B... $1.348 million was the asking price at the time. This unit at 4C was "gut renovated by Manifold Architecture Studio and published in 2008 as part of James Grayson Trulove's 25 book series," as Curbed noted. The price was reduced by 4 percent to $1,295 million on Oct. 31. It went into contract for the $1,295 million on Jan. 7.

Nisha Kewalramani, a yoga teacher with the Universal Force Healing Center in New York City. She earned her bachelor's in psychology from NYU and her yoga certification form The Ayurvedic Institute in Albuquerque, N.M.

And from the looks of this home, it should be enough to help achieve supreme awareness and enlightenment...
Posted by Grieve at 6:50 AM

"Om-M-G." Nicely done! And who knew contorting was so lucrative?

i should've been a yoga instructor. who knew?

My friend is a certified yoga instructor and does not live in a place like this!

that's it, i'm applying to nyu, since their grads are finding work

Um, guys, especially considering she went to NYU, etc. she easily could have had money given to her or gained aside from yoga.

I would suspect that Mommy and Daddy Kewalramani are con-signers on the deal.

Full disclosre: I own a co-op apt. I bought in the EV 1989. And I bought it without my parents' help. But 60% of the other owners in my building purchased their apts. with their parents as co-signers or with outright cash gifts from their folks.

It's hard to gentrify with your own money these days.

The fact that this woman is a yoga instructor is neither here nor there. I think with this post you are somehow equating improving one's physical health with the gentrification of the EV. There's nothing wrong with looking or feeling good -- are you telling me that Iggy Pop doesn't work out?

My wife and I live on East 11th Street, just two blocks from the Christadora. She is a yoga and pilates instructor and also makes the best egg creams I've ever had.

she is also a very nice girl :)