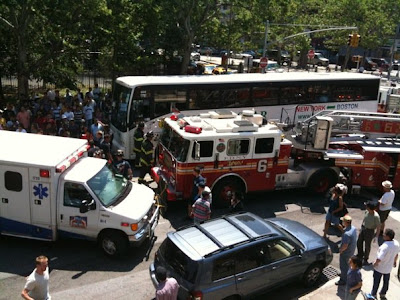 Today at 11:48 AM Lucky Star hit an older Chinese man outside of my window at the corner of Essex/Canal. He will more than likely die from the injuries. Bystanders thought they were helping and started to drag the man from under the bus. I along with others got them to stop, but damage may have been done. I hope he lives. ... FDNY was on scene within 2 minutes of the accident and acted quickly to free the man and send him off to the hospital. From what I could see from afar, the injuries along with his accelerated age, it does not look promising.

Still waiting to hear more on this from the mainstream media... nothing yet... The reader who sent me the original information passed along another message...

The whole scene was cleaned up by the time I sent you the photo. All that remains is the sand the firemen spread to cover his blood. They did not remove his shoe from the middle of the street. It's a very sad reminder of what may have been this man's last few moments. The whole incident took place and disappeared within 40 minutes. These buses are dangerous and the drivers some times don't pay attention like they should. The man was in the middle of the crosswalk -- there's no way the driver didn't see him.

DNAinfo has more on the story. According to police, the man's injuries are no considered life-threatening.
Posted by Grieve at 8:21 PM

Email ThisBlogThis!Share to TwitterShare to FacebookShare to Pinterest
Labels: accidents, Lower East Side

These big coach buses are a blight. They illegally park on our block at NO STANDING signs and block hydrants. They idle for hours at a time. The traffic police DO NOTHING because hey-the tourists are helping the economy. What's a little carbon monoxide and a few deaths? It's disgusting how the city ignores the health and safety of the people that live here.
THESE BUSES SUCK!!!!!!!!