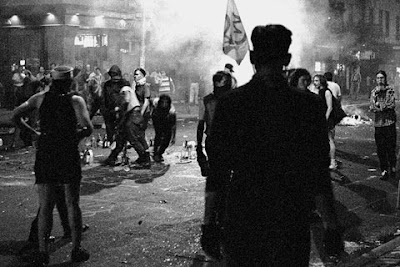 Out of habit this morning, first thing, I went to look at Neither More Nor Less. I wanted to see what happened, if anything, last night. Because I knew that Bob Arihood would have the story. And the photos.

As you likely know, Bob decided to retire the site this past week. I'm not sure what else to say other than that I'll really miss his work... the neighborhood is better off with his reporting, because no one else does what he did....he captured the absurd, the ugly, the every day that makes the East Village unique....

His style of reporting was of the old-fashioned shoe-leather sort and his main subjects were the itinerant travelers, street drinkers, punks, poets and sidewalk sleepers that once proliferated in the East Village but these days make up a vanishing tribe.

L.E.S. Jewels, Cowboy Stan, Drunkenstein, Bobby Apocalypse, Swami, the Groper, Outlaw, Loan Shark Bob, Barnacle Bill and the Mosaic Man, among others, all appeared in Mr. Arihood’s blog. Some of those subjects are now dead. Others are in jail. A few have survived and moved on.

[Photo of Avenue A and St. Mark's Place from Memorial Day 1991 by Bob Arihood via The Times]
Posted by Grieve at 9:00 AM

it is time to something cheesy here- he says "one man can't do it forever."

But that's the thing, maybe only one man can? or more better put, maybe the real stories of the east village are better shown though a single un-adulterated perspective, rather than a thousand new eyes valiantly typing away behind a luminous apple. I'm not sure how we will get any actual news worthy stories of the village without his blog.

Sooooo sad about Bob - but he's right - there isn't much interesting stuff happening in the EV anymore. What was one big whole freaky neighborhood has been condensed to the patch in front of Ray's.

When life appears on loop, its time to stop.