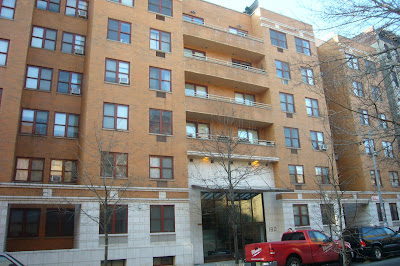 After years of living adjacent to Tompkins Square Plaza at 190 E. Seventh St. near Avenue B for years... a reader has had enough...

First, the reader wants to know why there's always a pirate flag flying on the rooftop deck of this luxury 124-apartment unit... is it supposed to be rebellious? Ironic? 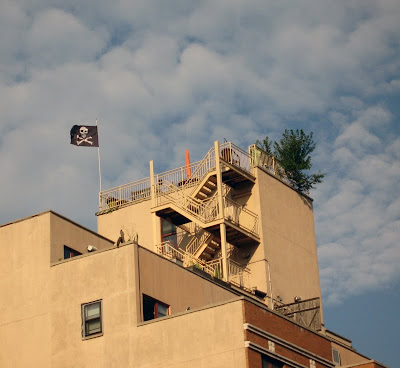 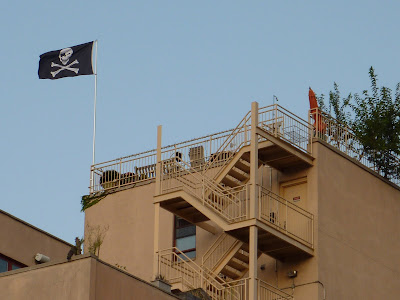 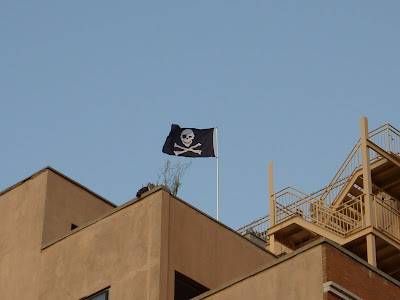 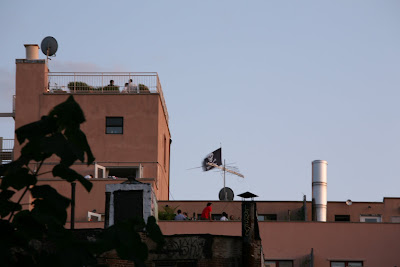 And it's not the rooftop blowouts that the resident finds annoying. It's just that one voice at the party, that one voice that is audible even over the shitty music: A woman's voice continually yelling.

By the way, the building went up in 1999... the site was vacant, though, as the Times noted, PS 71 used to be on this lot years back... Paul Stallings is one of the developers.
Posted by Grieve at 7:00 AM

The problem is not only the flag, but imagining the person who sought it out, hung it up, and is proud of it. God that's annoying.

The building houses stick figure Czech models, who generally go no further than the door to the car service. If you see one in the Associated Market on Ave C, it is considered good luck.

2. That's our flag and, nope, it’s not supposed to be rebellious or ironic and we definitely didn’t intend to annoy anyone (especially you) but we do appreciate the great length at which you went to write about us and judge us. To quote Anonymous, “God that's annoying.”

Despite living in the East Village since '91, we're not hipsters like you kids with your gmail and your crabby blogs. We just like a good pirate flag. (In fact, we’re so unhip, we don’t even know what Yunnibbean means.) Sorry you got so bent out of shape about it but you could always try just not looking at it. But it seems like you can’t. Alas, the lure of the pirate flag. As for the seeking it out, it wasn’t hard. And yeah, we were proud hanging it, as well. And...

3. The shitty music, the one voice, the woo-woo...that's not coming from our apartment or even our roof – though, yes, it is the same building. Sorry, we're only responsible for the anger-inducing pirate flag...not the other stuff you're surly about. But for what it’s worth, the noise annoys us too. Next time you hear it, you should complain to the doorman about it. We do.

Anyhow, maybe you should just go back to reminiscing about the East Village and how great it use to be, back when Tompkins was filled with vagrants and junkies (well, even more than now) and when a cab wouldn't take you past 1st Avenue, let alone all the way to Avenue C.

And, for what it’s worth, I’m sorry one family’s nice, un-ironic pirate flag is another person’s surly blog post.

I can see the flag from my roof, but I was under the impression that it was on the private roof terrace on 6th street, not the public one on 7th. I could be wrong.

Avast, with all the models living there, I wouldn't mind going aboard & plundering some booty. Just an idea.

What's annoying is people with nothing better to do than bitch about a flag, a pirate flag! Obviously it's done in humor, unless you are anti-pirate, it really shouldn't bother you. may I suggest doing something productive with your life. If you like to bitch and complain, then write a letter to your Congressperson about a topic that actually is important. Otherwise, go on being a petty, easily irritated person!

Huh, I always thought this was a home for subversive retired plunderers. Now I know...

The site wasn't a vacant lot. It was a community garden that was destroyed to build these luxury apartments.

Grieve is not mean. He is the opposite of mean, if you'd bother to read this blog. No one is "bitching" about your flag. You're going to have to point out the anger, meanness, surliness, or crabbiness in EVG's post (and then loan me your thesaurus). All I see is a a mild half-joking observation.

And stop WOOOOO!!ing; we know it's you, and it's super-annoying.

2:22, i think 11:17's response is in pretty good proportion to ev grieve's doing a whole post about the flag.

Awwww, Grieve got his Mom to come to his defense! Go, Grieve, go!

I am the wooooooooer! I am also a stick model/pirate! The fattest thing on me is my parrot. Aaaaaaargggggg!!!!!!

Well, I guess the question of whether or not the flag-bearer is a hypersensitive asshole has been sufficiently answered.

Oh Jesus. This post is not mean spirited at all. Grieve is simply relating something written in by a reader. You are some of the thinnest skinned pirates I've ever heard of. Woo Woo!

Ahoy Matey - why are pirates so mean? - they just ARRRRR!

i am the woo-er! and the walrus! i'm betty white under your limbo stick! i'm the jack sparrow of 7th street and i'll smother your carefully curated anarchy in the ruffles of my shirt and drink you down like pirate wine. long live the roof deck! long live dissent! let us feast like kings on the memory of what once was and what will never be! let bob a capture it like a zapruder film so i can tear through your incarnations of our shared mutual existence with my awkward hook-ended limb and limp away from it all, bloodied and proud, to rest once again on this brutal stump and lean hard into it, a barely fashioned answer to our unfinished leg of this race.

i wonder what randy the macho man savage has to say about this? (whatever happened to him?)
instead of a woooo woooo, it'd be ooooohh yeaahhhh.

Ah, yes, Esquared. I miss him too! it has been a long time... Perhaps he was priced out of the neighborhood!

Maybe REAL pirates took over the penthouse of that hideous building? Hence the flag!!! Yeah thats it.

...REAL pirates took over the penthouse...

Goodness. Call in a UAV strike! Or, perhaps, an NYPD helicopter assault! Bloomberg on horseback! If those pirates try to take our freedom, we'll let'em know who's their daddy.

As a fellow resident of this building, I am PROUD to live in the pirate building because I feel like having that flag up is everything that the EV stands for. WHO GIVES A SHIT if someone wants to put up a flag! On a side note, Ive met the people who live in this apartment numerous times and not only are they not the notorious WOO-ers... but they are actually great neighbors.

What kind of pirate has a doorman? Real pirates, the kind from Somalia, would kick your doorman's ass.

I am neither young nor hipsterish, but a genuine, real, crabby, vintage EV resident from 1968, and I think the pirate flag is a hoot. It makes me laugh every time I see it, which is a lot more than I can say for the tiresome, humorless little parvenu snotnoses who have a problem with it You go, pirate family! Long may you wave!

"I am PROUD to live in the pirate building because I feel like having that flag up is everything that the EV stands for."

Really? Did you miss this post entirely or are you permanently ignorant of ALL irony?

"The site wasn't a vacant lot. It was a community garden that was destroyed to build these luxury apartments."

what is it the east village stands for again.. is it raping and plundering the soul of the city in exchange for greed, empty, material wealth and status? if so, then yes you are an excellent proponent of the spirit of the east village.