There goes the neighborhood for real: 2 Cooper Square will open with the highest rents ever in the East Village

Yowza. The Wall Street Journal checks in with a story about 2 Cooper Square ... 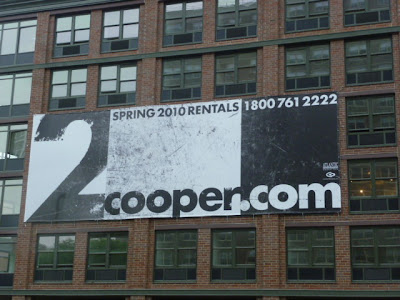 Atlantic Development Group, which owns or manages 48 rental buildings in the city, plans to open next month 2 Cooper, at East Fourth Street near the Bowery. The 15-story, amenity-rich building is charging the highest rents ever in this rapidly gentrifying neighborhood, brokers say. Three-bedroom apartments run as high as $20,000 per month.

Atlantic's initial plans for 2 Cooper were much more modest. In 2004, the developer designed a building aimed at attracting New York University and Cooper Union students.

But Atlantic switched gears when it saw that the Bowery neighborhood was going upscale quickly. Two high-end hotels were built on the street, and a contemporary art museum opened its doors south of Houston. In recent months, Keith McNally and Daniel Boulud have launched restaurants on the Bowery.

Amenities added by 2 Cooper include a 15-seat private screening room and a 75-square foot walk-in refrigerator on the ground floor to hold tenants' food and flower deliveries.

"The neighborhood has become a destination but what's stopped people from moving there is a dearth of luxury properties," says Yuri Lobachevsky, a residential broker with Citi Habitats.

The building has signed leases for 21 of its 144 units, according to Atlantic. The majority have gone to people who already live downtown and were looking for an upgrade, says Richard Cantor, a principal at broker Cantor Pecorella.

Previously on EV Grieve:
2 Cooper Square looking for some "masculine, attractive, intelligent" Clive Owens types with kids — but, lordy, not kids who actually live with them!
Posted by Grieve at 4:46 PM

Email ThisBlogThis!Share to TwitterShare to FacebookShare to Pinterest
Labels: 2 Cooper Square, expensive homes, there goes the neighborhood again and again

OMG There goes the neighborhood

"What's stopped people from moving (here) is a dearth of luxury properties"?!? Hell, he makes it sound like the buildings are either as abandoned or as empty as they were in the 70s and 80s! What he means is "What's stopped hideously rich people who only want to live in the neighborhood now that it has the correct amenities for their smug, overblown, self-referential pampered lifestyles" is a dearth of wildly overpriced lodging. Yuri baby - drop dead!

This IS disgusting. And Lisa nailed it. And the idea of paying $20,000, per MONTH, in RENT?? Even if you're rich, that's just ludicrous.

I just don't see this happening...