So far so good at The Penny Farthing, but how about the possible not-actually-secret secret downstairs lounge? 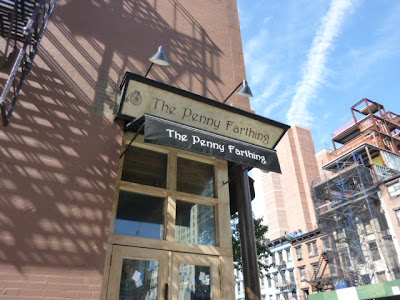 EV Grieve reader Margaret decided to stop by The Penny Farthing last evening ... it's new place on the southeast corner of 13th Street and Third Avenue....it was the former Cafe DeVille, who never returned from vacation last summer.

Here's what she had to say:

"[T]hey've definitely reimagined the space. In the old cafe, the bar seemed pretty secondary, but it seems pretty front and center now.

Right in the middle is a large table, and it looks like they've partitioned off some tables for diners over on the left. The old
bicycle wheels are definitely up, as is a decent draft/bottled beer list.

The hostess said the downstairs area is not open yet, as it's more for the Thursday through Saturday night crowd. My fingers are crossed that a "Thursday night crowd" does not mean frat-tactic. The people there tonight definitely seemed a little more mature, so maybe there is hope! And there are 4ish large TVs up in the space. Interesting mix of bar and restaurant, that's for sure. 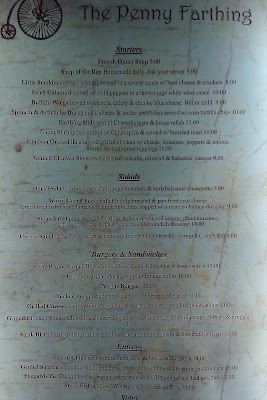 And what about that "downstairs area?"

I visited with my girlfriend on opening night (Monday). We were there 7-9ish, the bar area was pretty full and busy the whole time, while the dining area tables had a handful of groups.

Lot of staff but service was really slow and spotty, but it was all their first night working, so understandable. Overall beer and food are ho-hum, not bad, nothing special. Some respectable beer choices on tap (Goose Island IPA, Abita Purple Haze, Kelso Pilsner).

A co-owner came by and said hello and comped us a round, which was nice. He said they had opened the downstairs area for a bit, but no one was going there, so they closed it for the night.

The space inside has lots of wood, rustic-looking, and looks and feels pretty warm and cozy for such a large space. All the wood inside looks really nice actually.

Crowd was a bit older, not much of the NYU set there. Not frat-arded, but this was an early Monday night. It was pretty loud inside, and the 4-5 TVs had on sports.

Anyway, it was innocent enough, but we were there on opening night, a Monday. We'll see how it goes...

Thanks for the report!