A happy ending next door to Cabin Down Below 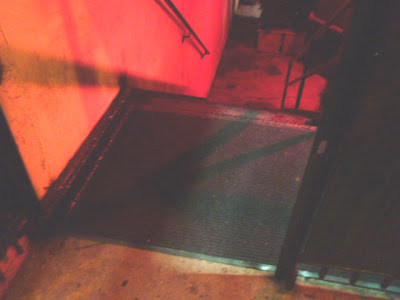 Back on March 25, I did a story on the family who lives next door to the newish entrance to Cabin Down on Seventh Street at Avenue A. The residents were often kept up for hours at night by the clack-clack-clack-clang-clang-clang of footsteps on the steel stairs bargoers use to enter and leave the bar...

As I left off, the resident had heard back from one of the owners, who expressed concern over the situation...

Anyway, good news to report... the resident reports that the problems has been resolved. In recent weeks, a worker has tinkered with the steel stairs. Among other things, the stairs now have rubber treads ... as well as a padded mat at the landing... He said that this has resolved the problem to the point that it no longer disturbs the resident and his family. (Aside from the fix, he said a small part of it had to do with simply getting used to the noise.)

While it did take a few phone calls... a few weeks of waiting, he said that he was happy to report that a resident can still resolve a problem without getting attorneys involved or tossing water balloons at the offending parties.

Perhaps there's hope left for the rest of the neighborhood...?

Previously on EV Grieve:
Life above Cabin Down Below
Posted by Grieve at 7:00 AM

Email ThisBlogThis!Share to TwitterShare to FacebookShare to Pinterest
Labels: Cabin Down Below, noise, Seventh Street

And a little lively discussion on a neighborhood blog never hurts either!

yay! so glad for co-existence and cooperation!