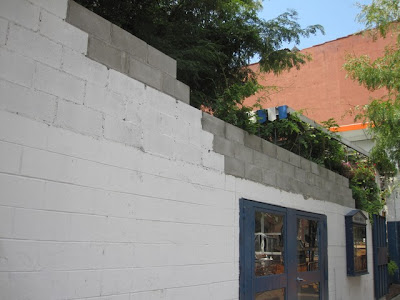 [Photo by Patrick Hedlund via DNAinfo]

On Monday, Curbed noted that the DOB slapped early Bowery ruiners the B Bar with a stop-work order...the offense: the addition to the eatery's wall around the outdoor dining space.

The high-priced 2 Cooper Square tower across East 4th Street, a luxury rental rising 15 stories with a pool on top, is about to open with views directly down into the restaurant's prized courtyard.

Earlier this summer more rows of cinder blocks facing East 4th Street went up in an attempt to keep prying eyes off the drinkers and diners partying under the downtown sky, even though we thought the Bowery was all about seeing and being seen these days.

Patrick Hedlund followed up on the item for DNAinfo, speaking to B Bar manager Melissa Beck. The wall, she said, is to help muffle any sound coming from the eatery's outdoor space.

She added that the owners previously removed speakers from the garden space to keep the volume down, and that the wall extension acts as a way to contain the noise with so many new families moving into the neighborhood.

According to Department of Buildings records, the stop-work order remains in place due to the construction being done without a permit.

The DOB did not immediately respond request for comment about the whether the addition will have to come down.

And the B Bar manager was dismissive of Curbed's prying eyes theory from the incoming 2 Cooper residents.

"What are they going to look at?" she said. "People eating dinner, or the random drunk girl that's puking her guts out? It's not like we have a strip-tease section."

Email ThisBlogThis!Share to TwitterShare to FacebookShare to Pinterest
Labels: 2 Cooper Square, the Bowery

I remember being horrified when this place first opened, but my employer had an account there & we HAD to eat meals in & from there sometimes. The entrees were model sized portions & I'd have to order 2 entrees just to fill me up. For the record, I'm not fat, nor do I eat anymore than the average thin person.

2 entrees to fill me up! For lunch! I'd say that I can't believe that they survived, but I saw the writing on the wall long before places like this arrived on the scene.

"With so many new families moving into the neighborhood." Does this bartender have some demographic insight I've missed?

bowery bar used to be an interesting gas station with a lawn. when they converted it into a "restaurant" the lawn was preserved and there were flowers. the place did not fit into the existing neighborhood but at least it was pretty. after stars, especialy madonna, started making it a destination and walls went up, more tables were added and all the pleasantries were removed.
i believe cooper union owns the land.

I'd rather have a gallon of gasoline and a bed at a Lyons House.