Back in February, we inexplicably wrote a post about the revamped Hook & Ladder II in the Financial District... 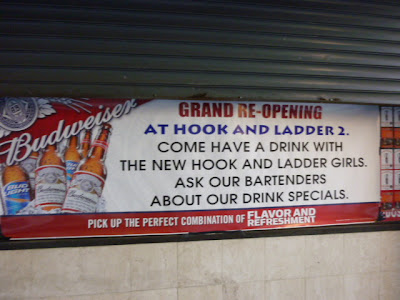 ...featuring the "Hook and Ladder II bikini bartenders," one of whom in the ad looked a lot like Mariah Carey in a firefighter's uniform ... 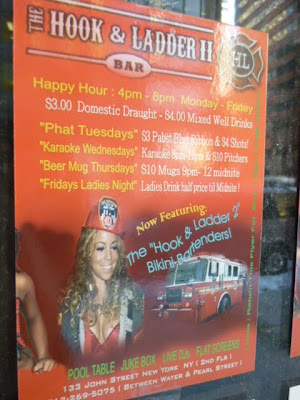 Anyway! I'm not sure when this happened, but the Hook and Ladder II is now closed. And their phone has been "temporarily disconnected." Let's just say that the place hasn't been open the last three weeks.

They were maybe foolish to take on the nearby Nassau Bar, where the bartenders look like extras from a Russ Meyer's movie.... 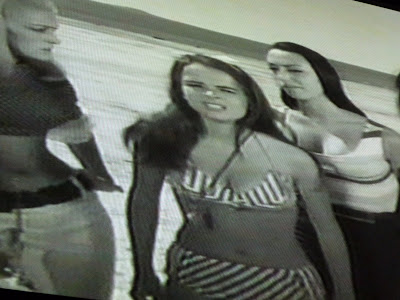 Anyway, for some reason, I will now share this story.

Shortly after HALII's grand reopening, I walked in. To see just how cheesy it would be. Never been in the place before. I walked up the stairs, and spotted an empty bar with some dude in front of the taps. A terrible mistake had been made. I quickly turned around to leave.

I must have looked like some sadass middle management type in need of an after-work jolly. Maybe I am! He called out a woman's name.

Let's call her Mary. Mary peeks around the corner of the back room. The fellow makes a motion for her to come behind the bar. In a very bashful manner, she gingerly walked her way to the bar, zipping up a baggy hoodie to cover her bikini. The scene struck me like a sister whose older brother was making her do something she really didn't want to do, like tend bar in a bikini.

This was her first day on the job. No kidding? She was nice. She smiled. She had braces. She was probably 24. And she had never tended bar before. The fellow explained that they were out of ice, so any mixed drinks would have to be served warm. I ordered a bottle of beer. I watched as he explained the finer points of bartending, such as how to make a gin and tonic.

A few entertaining minutes later, we all got to talking. The fellow and Mary were old friends. We discussed the news of the day. Sports. Movies. Her favorite all-time movie was "The Dark Knight."

So it went. About 15 minutes later, I left. I wished them all the best. They said to be sure to come back and bring all my friends. I promised that I would, though I don't really have any friends who would ever come here.

Previously on EV Grieve:
In the Financial District, Mariah Carey helps usher in the start of the bikini bar war
Posted by Grieve at 6:40 AM

Wow, I felt awkward just reading that. I hope Mary has since obtained her graduate degree and moved on...

It was arguably the most awkward bar situation that I've been in of late... Not quite up there with slow-dancing with Hot Dog at Lucy's...

F U Goggla, why's she need a bachelor degree?
I and many others do very well without that overpriced bullshit.

I guess one could make a case that starting a sentence with an abbreviated expletive (F U) and following it with a grammatically incorrect contraction (why's) would be the best argument for obtaining an education. Also, the inability to detect sarcasm and/or cynicism through logic would also make the need for that education for some people, quite evident

What a sad, sad story. Please don't do that again.