A memorial for Merlin

There's now a tribute to Merlin here on Avenue A at Sixth Street by the ConEd substation.... marking the anniversary of his death. 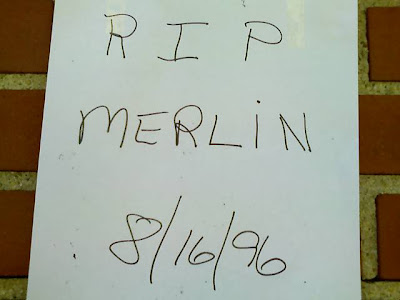 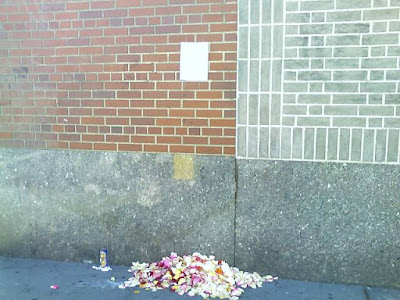 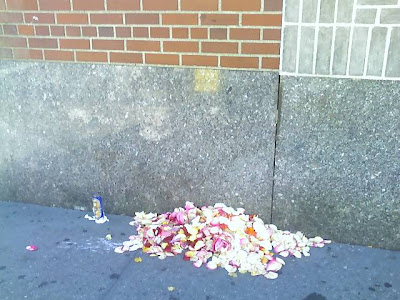 There are few certainties in this changeable city. But on Avenue A and Sixth Street, a place that has been convulsed by change in recent years, one thing has remained constant through the riots and real-estate booms: Merlin, a 41-year-old homeless man who uses only one name, has made the intersection's southeast corner his residence for eight years. Neither blizzards nor blistering heat have routed him from atop a set of wooden pallets in front of a Con Edison substation.

"People move in and out of the neighborhood, but I never budge," he said last week, lounging beneath a pair of tattered umbrellas, his only guard against the sting of the sun. A stroke has left him partly paralyzed, and frostbite cost him several toes three winters ago.

To strangers, he is but another intrusion on the East Village's gritty streetscape, a reason to avert their eyes. But to many local residents, he is a cherished asset: a timekeeper, a message center, a town crier and a source of good, solid conversation. "Merlin is a social hub," said Tatiana Bliss, 25, a local artist. "If you're looking for someone, Merlin probably knows where they are. If you want to leave something for a friend, he'll make sure they get it. He makes this crazy city feel like a small town."

[Thanks to EV Grieve reader Anna for the photos]
Posted by Grieve at 1:33 PM

Does anyone know anything about the guy that is always stooped over and tells you you're cheap when you don't give him any money? He's usually outside the bus stop near 2nd and Avenue A.

He's not been the most friendly, so it's hard to get his story. But I'm often in Mary O's across the street from him and he has one of the highest conversion rates I've ever seen. People constantly turn back and give him money, fives and tens sometimes. I've seen him get on the bus after a few hours there. Someone I know saw him go into an apartment several times, so he has a place to live/stay.

The stooped-over guy also used to have a woman who would come over to him every so often. I haven't seen her in a while, but she would come over and get the money from him, then go into a bodega or something. I got the impression she is the person he lives with.

So good to see that there is still a memorial to Merlin. I remember him very well; talked to him every day to and from school as a kid until he passed. I miss him.

About the guy by the bus shelter...I've never seen anyone give him money! Wow. I am quite surprised to hear that people actually turn back around. But good for him. I always describe him as "the guy who asks for money right AFTER you've passed him."

Thanks guys. This blog is such a great source of information-sharing!