[Updated] Claim: Sin Sin is closing at the end of the month 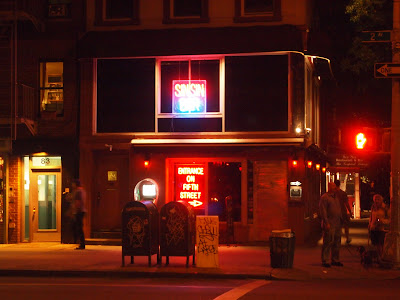 That's the word, anyway, in a thread passed along by a tipster at rapmusic.com. Per chazraps:

SinSin is closing at the end of the month.
Just got the word at noon today. Freestyle Mondays, and the battle, will be moving to another location in NYC, as well as starting in Prague this month. SinSin itself, however, will be shutting down. The final Freestyle Mondays there will be October 25th.

The embattled club on Second Avenue and Fifth Street has been facing mounting criticism from residents in recent months. Then there was the tragic story of 37-year-old Devin Thompson, who was shot twice outside the club on Aug. 22. He died from his wounds on Aug. 31. According to reports, Thompson and the two men police believe are responsible for the shooting were inside the club earlier in the evening on Aug. 22.

Updated: Grub Street reports that Sin Sin “has decided to close, re-open and go a different route. Like many venues around the city they too have to keep up with the times and cost of operating here.”

Why the president of the East Fifth Street Block Association carries a baseball bat
Posted by Grieve at 2:01 PM

Now a ramen place can be there.

Congratulations to the neighbors who have been tortured by this place. And here's hoping another nightspot doesn't open in its place. I am sure you'd be happy for a Duane Reade or a bank branch at this point. :)

How the fuck is it a bars fault if someone who was inside shot someone?

I originally decided to write this response directed at the highly offensive, bigoted, misguided and racist (this holds true irregardless of the race of the author) comment "Ghetto/Thug crowd=Murder."

Then I saw this when I went to post: "This is an individually run blog, not a democratic nation nor a wide-open public forum. Comment publication is entirely subject to the owner's discretion."

Which leads me to wonder about the position of the editor on this, or perhaps this is an item for public forum? An official comment would be helpful.

I can appreciate the struggle of the inhabitants of the east village to control their neighborhood as domestic residents and as business owners.

Thanks for the comment, Malik. I never should have approved the previous comment, and I have deleted it.