"Generation Um" continues filming around the Lower East Side... there's a noontime scene being shot now at the AlphaBet Cafe on 14th Street and Avenue B... no sign of lead Keanu Reeves... but there are several people in straw cowboy hates (er, HATS!) and balloons... 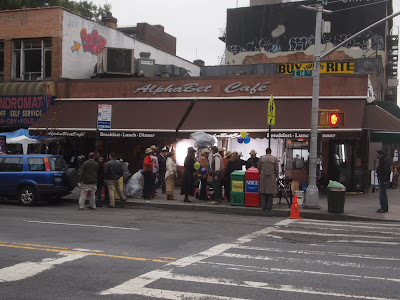 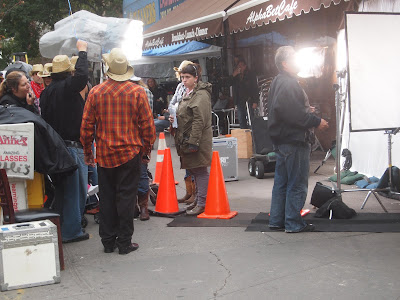 According to IMDB, the film is set in Los Angeles... which means the LES is more LA than LA?
Posted by Grieve at 12:59 PM

stupid bloomberg and his tax subsidy for film crews.
what is this movie even about?

A drama that follows three adults during a single day in Los Angeles, one filled with sex, drugs, and indecision.

they started filming last night, p.a. asking re-routing everyone walking on the sidewalk in front of alphabet cafe and into the puddled street instead

Why don't they film in LA then? Surely it's cheaper there. Hello, Hollywood? What do I know.

@Glamma -- dunno how "stupid" a tax subsidy is if it keeps the work and jobs in NYC rather than somewhere else. It's not just overpaid stars who work on those crews.

Keep movie making in NYC, I don't care how many times I have to "cross the street, please" or "wait, just a minute, please" or what have you. It's keeping my friends and neighbors employed.

@VH McKenzie - it is also keeping four-leggeds employed. Bayou has a cameo in the Keanu film. He worked for scale.

Hmm... cowboy costumes in a modern day street scene? Sounds like a crap movie to me. That's a shame considering how scrumptious Keanu is. Sigh.