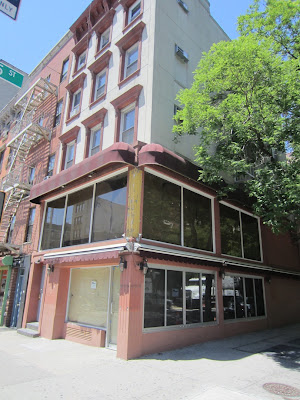 The former Sin Sin space is on the docket for this month's CB3/SLA meeting on June 20. According to DNAinfo, a bakery-café tentatively called "Sweet Boutique" will open here in the next few months. The building's owner tells DNAinfo that the bakery will have food display cases and café seating on the ground floor with more seating, waiter service and a "small bar" on the second level.

And the early verdict from the East 5th Street Block Association? "It's a little confounding. I am unsure as to why a bakery would need a full liquor license," Association president Stuart Zamsky told DNAinfo's Patrick Hedlund.

Countered building owner Alex Shkolnik: He needs to serve alcohol and keep late-night hours for business to stay viable. "They have to have liquor," he said. "I don't think it's going to be bar."

Meanwhile, we need to add a "bakery" category to the community board-State Liquor Authority drinking game.

"They have to have liquor" AND "I Don't think it's going to be a bar."

It's one or the other, not both. Give them the liquor license, and my guess will be that the first floor will be a bakery and the second floor will become a raging techno-fueled sweatbox bar/club, staying open till 4 (or way past - don't forget that they operated as an illegal after-hours spot for quite some time).

Lol they have already been reaching out to promoters for late nite and u idiots will let this happen! It's landlords family so why not just reduce rent so it can operate as bakery. He knows liqor makes the dough!!!!

What are they serving....Rum Cake? This is preposterous. It is just a way for the new place to turn itself into a bar, which is definitely not needed in this neighborhood which already has an over abundance of places that serve too much alcohol.