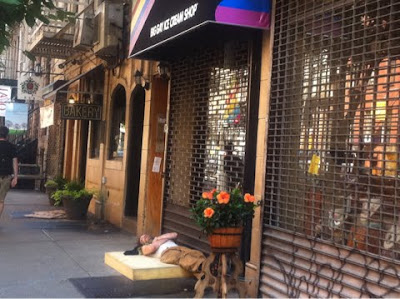 This morning on Seventh Street... under the shelter of the new awning. Photo by @beatsforlyfe.

Oh no word yet on an opening date... but the (ice cream?) machinery should arrive tomorrow.

Maybe he's waiting to be first in line when they open.

welcome to the EV--don't mess with Ray's?

Could we entice him to do the same to Van Leeuwen on 7th near 2nd Avenue?
When I walked by yesterday they had a sign outside stating:"Artisanal Ice Cream Intelligentsia"

I slept on my friend's fire escape across the street from this Big Gay Place a few weeks ago to familiarize myself with the crusty worldscape I'll be plummeted into when I can't pay off my college loans. The mound of cigarette butts, rusty wrought iron, and some exotic bug bites I received during my cramped slumber assured me that I am fucked.

Uncle Waltie, I like where you are going with this...

I'm sick to my stomach over this ice cream place opening on my block! Can't SuperDive open a new location on this block?! Ice Cream is so...quiet & peaceful! And to boot: the owners actually seem like nice people who care about the 'hood. Gosh I'm sick to my stomach over this! Where are all the bar owners? And that nice quiet place down the street (Van Leeuwen) - DO NOT get my started! I was praying that would turn into a sports bar! DARN!

i like the Big Gays. they're not pretentious enough to use the word "artisanal" and i don't think the Nilla Wafers in their Bea Arthur are "locally sourced" or "sustainably grown."

still, for the record, there are too many frozen treat shops in the area.

is les jewels the new welcome wagon host nice to see he is on the up and up ...

Sarcasm at its best is delivered by informed, witty people. Fools just spout inanities. You decide which category you belong to. A Superdive or Sports Bar would never get the necessary permits to open a place on East 7th Street. Have a good day.

For fuck's sake, pick your battles! I doubt the old-timers, people here longer than me (20 years), have any problem with these shops. The Big Gay guys are sweet, fun and, really, what's not to like? (Aside from dissin' the "crusty.") Yes, college bars needs to be bombed, but barring douchebars, garden restaurants and similar yah-hoo/whoo-hoo magnets, I'd like to know what the complainers here would like to see go in all these empty storefronts? For me, bring on the ice cream, coffee shops, silly boutiques. (The latter won’t last: http://bit.ly/jK0x1f )

Meanwhile, how about a (serious, realistic) top 5 list of preferred establishments that would meet with your approval? - Andy on 7th between First and Second.