The art evolution of Ulli Rimkus and Max Fish 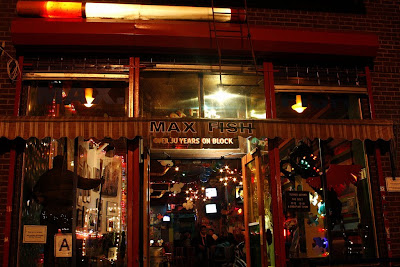 [All photos by Joann Jovinelly]

To some, this year is symbolic of a potential global crisis that threatens civilization, but for a few New Yorkers that death knell rings much closer to home — on the Lower East Side. This year marks the threat of a different kind of death — the potential closure of a beloved bar known as Max Fish that has for more than 20 years been the life blood of New York’s downtown arts community. 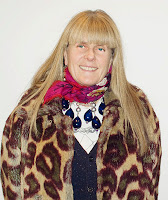 Fortunately, when we finally caught up with owner Ulli Rimkus, we found her firmly rooted.

“We have no immediate plans to leave, and in fact, we’re good for now,” she explained joyfully last week.

If you recall, in December 2010, reports surfaced that the demand of rising rent costs might lead to the removal of yet another New York mainstay. However, by January 2011, Rimkus had received a one-year lease extension. Now she's here indefinitely. 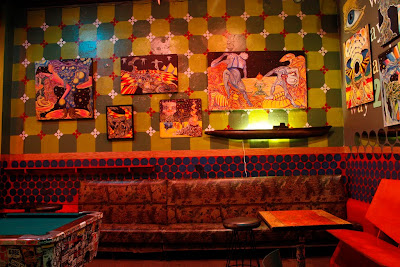 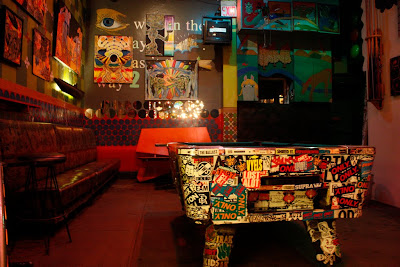 While business has been up and down of late, Max Fish remains populated by regulars as well as newcomers hoping to mix it up at this storied art spot. For now at least, the hysteria of a forced move remains distant.

Hang the Art; the Beer Will Follow
Rimkus opened Max Fish on Ludlow Street in 1989, first as an art gallery, but her artistic past goes much deeper. More than a decade earlier she had arrived to the United States from Düsseldorf, then a part of West Germany.

In her twenties and eager to lay claim to New York’s thriving arts scene, Rimkus and her then boyfriend, artist Christof Kohlhofer, moved to the Lower East Side in 1977. They soon became members of the collective Collaborative Projects, Inc., or Colab, a loose confederation of artists that courted the likes of filmmakers Charlie Ahearn and Jim Jarmusch, painter Jane Dickson, sculptor Tom Otterness, and printmakers Kiki Smith and Jenny Holzer, and as many as 50 more.

By working together and establishing a nonprofit status the following year, Colab quickly evolved into a positive force in New York’s contemporary art scene. Besides being in control of its own exhibition spaces (which typically meant temporarily taking over abandoned spaces) Colab produced arts shows for Manhattan’s public access cable TV network, helped champion the nonprofit arts space ABC No Rio, opened a screening room for Super 8 films on St. Mark’s Place, and encouraged the intermingling and strengthening of the arts community at large.

Rimkus was at the center of that thriving push for unity and she even co-authored one of Colab’s first National Endowment of the Arts (NEA) grant applications, which later became a mission statement for the fledgling group.

No Gallery? No Problem
Within two years of its formation Colab began hosting radical group shows, first with The Manifesto Show in 1979, which broke new ground and caught critics’ eyes. The Real Estate Show followed in 1980, but none were as memorable as The Times Square Show. Held during the summer of 1980 in an abandoned four-story massage parlor on 41st Street and Seventh Avenue, critics hailed the exhibit as the arrival of New York’s “punk rock” artists. Nude models milled about and mock peep shows were staged. In one room, an orange punching bag hung from the ceiling. 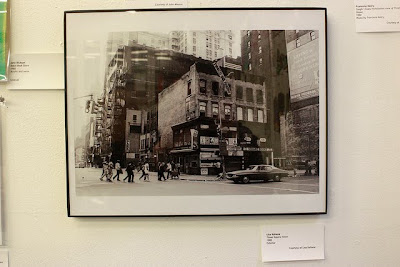 According to its press release, the month-long exhibit took on “the complexities of the human condition, theatres of love and death, invention and phenomena…daring performance, comic relief, arcades of fiction and halls of art from the future — all beyond the horizon of your imagination.”

The Times Square Show had legs. Uptown gallery owners jockeyed for the opportunity to buy the work, and Jeffrey Deitch, Director of the Los Angeles Art Museum but then a young art critic, wrote that the art was “raw, raucous, [and] trashy, but exciting.”

The surging popularity of the artists, many who lived on the Lower East Side, paved the way for the first wave of gentrification in the East Village. Before long, galleries popped up on every other corner that would eventually create art stars out of Keith Haring, Kenny Scharf, David Wojnarowicz, and many others. Within five years, the East Village surpassed SoHo as New York’s art mecca with more than 78 galleries lining its streets by 1985.

In the late 1970s, however, the city’s contemporary art scene thrived for established artists, but not for newcomers. Colab was significant because it pushed the boundaries of what struggling artists could control, especially when they banded together.

Samuel M. Anderson, Ph.D., who has written extensively about the groundbreaking show, noted the power that was yielded by Colab and the significance of the artist alliance.

“Just as distinctions between the specific art works on display and the genres they represent begin to evaporate, distinctions between basic ontological concepts dissolve in the chaotic play of objects housed in a four-story massage parlor,” he wrote. “This was the particular, disorienting contamination of power wielded within the bounds of The Times Square Show: Not only materials, but genres, categories, sensibilities, even whole realities met, merged, and infected each other with the tumultuous interplay of their qualities, their meanings, and their histories.” 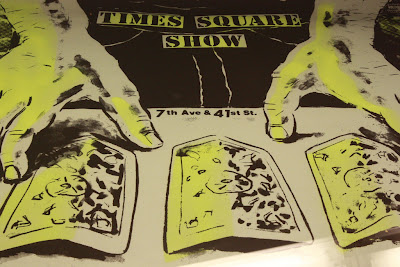 “Jane Dickson painted a portrait of Ulli on a black plastic bag and hung it in the second-floor stairwell,” Ahearn recalled. “Ulli was there often, hanging up work, helping out in the ‘gift shop’ on the ground floor, or up on the second floor ‘fashion room’ where Sophie VDT [another Colab artist] had hung work and Jean-Michel Basquiat painted a red abstraction directly on the wall. Basquiat also painted the words ‘Free Sex’ over the main entrance doorway, but someone else painted it out.” [The Times Square Show was Basquiat’s first entry into showing work professionally.]

“Ulli was an amazing supporter of artists,” Ahearn continued, “especially of Kristof Kohlhofer, who not only painted his stencil art on canvas, but was a forerunner to [today’s] street art scene, painting his stencils up and down Ludlow Street.”

Basquiat was also better known as a graffiti writer. His street tag, SAMO (an acronym meaning SAMe Old shit) was once found all over downtown Manhattan. He had become loosely affiliated with Colab through Diego Cortez, a filmmaker he’d meet at the Mudd Club, but he quickly left the graffiti world when his popularity exploded, just a few years after his associations with Colab.

But the collective was not without its problems. Just two months prior to The Times Square Show, the group was in danger of losing its NEA funding due to the work of one of its members, Tom Otterness, whose controversial project Shot Dog Film turned the stomachs of anyone who watched it. (Otterness, who fatally shot a dog in the video has since apologized, but continues to face opposition from some New Yorkers based on that 30-year-old work.)

Joann Jovinelly is a freelance writer and photographer who still calls the East Village home. When she's lucky, she sells her work and pays the rent. She knows about the Times Square Show because she lived and worked with Charlie Ahearn and Jane Dickson in the late 1980s and they told her all about it, among other things.

[Photo of Ulli Rimkus via New York Art Department]
Posted by Grieve at 7:00 AM

Max Fish has been a crappy, clichish snob fest for years...