Here's some follow-up on our story yesterday about the Cabrini Center for Nursing and Rehabilitation on East Fifth Street at Avenue B closing in the next four-five months.

First, here's a copy of the letter that circulated to dozens of local elected officials and friends of Cabrini yesterday about the closure... 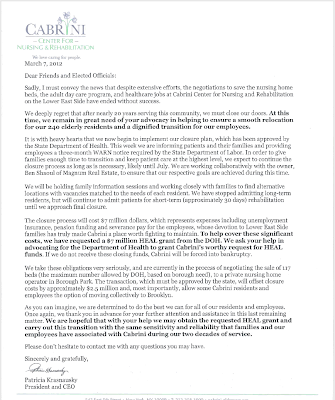 In order to give families enough time to transition and keep patient care at the highest level, we expect to continue the closure process as long as is necessary, likely until July. We are working collaboratively with the owner, Ben Shaoul of Magnum Real Estate, to ensure that our respective goals are achieved during this time.

The closure process will cost $7 million dollars, which represents expenses including unemployment insurance, pension funding and severance pay for the employees, whose devotion to Lower East Side families has truly made Cabrini a place worth fighting to maintain. To help cover these significant costs, we have requested a $7 million HEAL grant from the DOH. We ask your help in advocating for the Department of Health to grant Cabrini’s worthy request for HEAL funds. If we do not receive these closing funds, Cabrini will be forced into bankruptcy.

We take these obligations very seriously, and are currently in the process of negotiating the sale of 117 beds (the maximum number allowed by DOH, based on borough need), to a private nursing home operator in Borough Park. The transaction, which must be approved by the state, will offset closure costs by approximately $2.5 million and, most importantly, allow some Cabrini residents and employees the option of moving collectively to Brooklyn.

We are deeply disappointed that Cabrini will be shutting its doors after two decades of service to its patients and the Lower East Side community.

We collectively and aggressively worked to encourage the parties to reach a better conclusion, and believe they should have reached an agreement to keep Cabrini open in its current location until a new site became available.

This is a terrible loss for the Lower East Side, and for the greater New York City community. We're committed to working with Cabrini and the community to ensure a smooth and dignified transition for patients, their families, and Cabrini employees.


In addition, we heard late yesterday afternoon from Kenneth Fisher, the attorney representing developer Ben Shaoul, who purchased the building last fall. Fisher wanted to clarify a point in our post:

Your statement that we would not grant an extension so that Cabrini could build a new facility on land provided by the Archdiocese isn't quite correct. We were willing to consider something, but Cabrini turned out not to be able to move forward with it. We also at their request attempted to sell the building to a for profit operator at their request who turned out not to be able to perform. It was only after those alternatives failed that we advised Cabrini that no extension would be granted. Please bear in mind that this situation was created when the previous seller decided to sell ad set a price that Cabrini couldn't meet. We attempted to work with them in good faith.

Read the full story here.
Posted by Grieve at 6:57 AM

It's a developers paradise. I know Bloomberg couldn't be happier. Develop at any price. To him this is progress and a sign of the city's health. How ironic. Low/middle income? This ain't your town.

and another nail is being hammered...

Someday, ironically, Shaoul's own children, having had the benefit of Ben's wisdom over the years, will undoubtedly show their father the kindness and compassion he is showing our seniors today!

So not only are they kicking the elderly out, they are making them pay for their own eviction. Can't wait until Ben Shaoul gets old.

Here's a thought - since Mr. Shaoul is probably going to make a gazillion dollars off this property once he sells all the space as high-end condo's, why doesn't he pick up the $7MM tab for Cabrini to shut down? Why do the taxpayers have to foot the bill (again and again and again) so that real estate speculators can ge rich?

these people are richer than god and are entirely full of sh*t. what an unbelievably INSULTING response from shaoul's lackeys. seriously they should be ashamed of themselves. how could anyone do something so completely, outrageously evil?
How do they sleep at night?
Hey buddy - money ain't everything - what's the matter, no one ever told you that you can't take it with you?
Jeez

This is what one of the highest tax rates in America is for: to offset the costs of the rich trying to get richer.

Remember in the 1980s when everyone was talking about welfare queens, feeding their kids steak and driving Lincolns on our dime, but then there turned out to not be any? Well, that's because the real welfare kings and queens aren't actually on welfare, but are people like Ben Shaoul, rich parasites sucking the nutrients from the desiccated corpse of the lower and middle class, growing fatter and more burdensome every day. I'd say we should flush these parasites out in a torrent of vomit and shit, but it's already too late for that. What the parasites don't realize is that once they've killed their host, their days are numbered. Where will the vampires feed when there's no one left who produces blood?

to mr. fisher... you're full of bs! you want extension for cabrini but increasing the god damn rent 3x of what they are renting! and also selling it to the new profit operator in a much higher price! where is the attempt to work in good faith or in good profit?