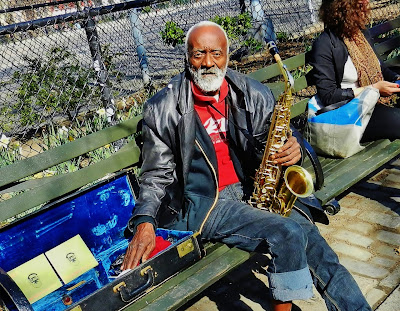 [Photo from March by Bobby Williams]

There's a detailed feature in the Times today on Tompkins Square Park regular Giuseppi Logan. The 76-year-old who released two pioneering free-form jazz records in the 1960s is primed to make a comeback with a new CD and a Kickstarter project...

John Leland's articles delves into Logan's missing 30 years (his wife had him committed into a mental institute) ... and the long journey that brought him back to the East Village...

Here's a passage from the article about his days:

TO get from Tompkins Square Park to his room on East Fourth Street, a trip of just a couple of city blocks on foot, Mr. Logan hobbles west to a northbound bus on Avenue A, then gets on a bus at 14th Street that drives east to Avenue D and then turns south. It can take half an hour. Most days, this is the extent of Mr. Logan’s universe.

We've posted this video before... seems appropriate to do that again...

Glad Guiseppi is ok after all that.

Betca a nickle boozeburg thugs shut him down this summer, saying he's selling cds without a permit.

Handsome gentleman. Is he single? ;)

My dads a good man