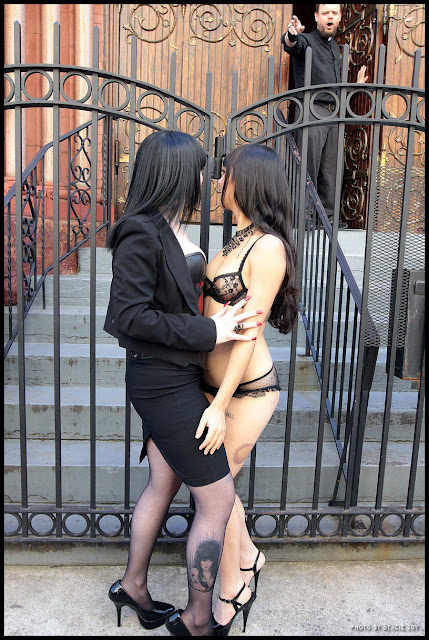 This past Friday, Stacie Joy began a photo shoot with Samantha Clark (left) and Amanda Whip. The first stop was on the sidewalk on East 10th Street near Avenue A... which happens to be beside The St. Nicholas of Myra Church.

Quickly enough, a priest came out and, well, started yelling for them to leave. Despite being on a public sidewalk, Stacie and company packed it up "so as not to offend him further."

Anyway, probably no more randy than the scenes "Gossip Girl" filmed at the church back in October 2010...
Posted by Grieve at 7:00 AM

Well that was Good Friday for Eastern Rite churches.

Just because you can, doesn't mean you should. Very disrespectful.

BUt they got paid for gossip girl

On the one hand, it's nice to see weirdoes, deviants, or anyone the the slightest bit odd in the neighborhood again, now that we've been taken over by bland idiots.

On the other hand ... *massive eyeroll*

What a great photo!

This reminds me of the time a mosque moved to a new location in Manhattan and then registered a complaint with a bar across the street because the Muslims were offended by being able to see folks drinking alcohol through the windows.

Mr, Preacherman should count his blessings that he gets over tax-free while the rest of us have to PAY to live here!

LvV comment does hit the mark just about right.

But also; it really IS a great shot.
When I first saw it I erroneously assumed the whole shot was a staging; maybe a shot from a movie filming in progress or something. It's great.

ditto what LvV said--but the angry priest in the background does add a certain something.

What's the world coming to when you can't stage a homoerotic photo shoot -à la Helmut Newton- in the privacy of your own church steps? Mon dieu!

where was twilight sparkle and fluttershy at?