Last night, we watched the NYPD shut down Tompkins Square Park around 9. We spoke with several people watching the police assemble on Avenue A at St. Mark's Place. One man spoke of a "mob" that broke windows at the Astor Place Starbucks. And that this pack was headed toward the Park. He seemed excited about this prospect. Another couple confirmed hearing the "mob" story as well. Several of the officers who arrived said that they didn't know why they were there. "We just show where they tell us to go," said one.

I got roped into attending a NYC #FTP march. About 40 mostly white punk kids. My hopes are not high.

From there, this so-called black bloc headed down St. Mark's Place between Third Avenue and Second Avenue.

(Runnin' Scared has a recap of the events here.)

Six undercovers just tried to grab someone.crowd rushed back and freed their comrade. Shit is heating up

After a few run-ins with the NYPD, the group quickly dispersed.

And poof, they're gone! Crowd split up, presumably to regroup elsewhere. #nyc #ftp

A whole lots of nypd rolling through tompkins but no protesters at all. No idea where they went. #nyc #ftp

Later last night, as Gothamist reported, the NYPD shut down East Sixth Street between Avenue B and Avenue C and arrested two men at an after-party of the Anarchist Book Fair at the Sixth Street Community Center. There were reports that someone was throwing bottles from a rooftop.

At the time last night, several people thought these incidents were all related. However, attendees of this party told Gothamist that the two incidents were unrelated.

(There were a lot of crazy stories making the rounds last night. One person told us the police closed Tompkins Square Park because it "smelled like urine.")

Meanwhile, this morning, we walked on Astor Place and St. Mark's Place. There wasn't any evidence that windows were broken at the Astor Place Starbucks. However, as noted last night, someone did smash a window at the soon-to-open 7-Eleven on St. Mark's Place near Second Avenue. 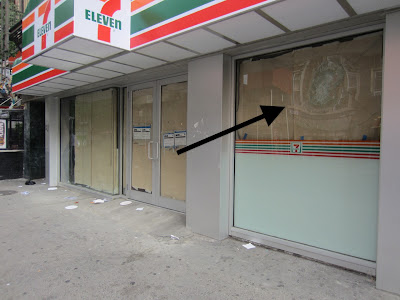 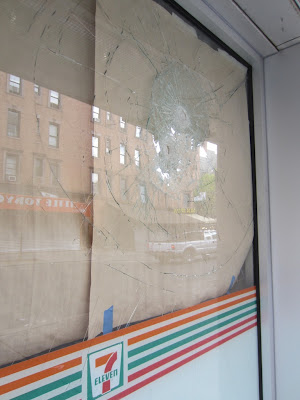 Someone also smashed the side of this payphone on St. Mark's Place. Of course, this could have been a typical Saturday night act of vandalism... 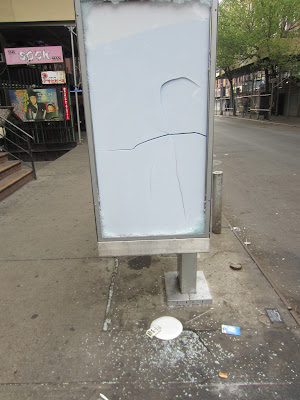 Ditto for all this... 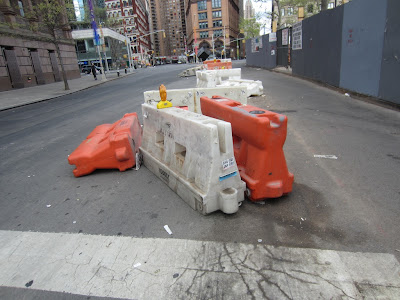 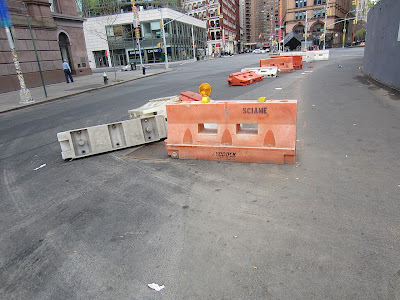 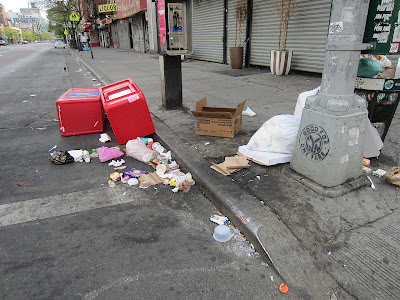 Previously.
Posted by Grieve at 11:22 AM

Can the arrow have eyes, like the umbrella in the Abilify commercials?

That arrow always makes me think of Harry Nilsson.

How many of these really live here? why mess up our streets Go back to OHIO and brag about your big nite out

You mean go back to New Jersey/Long Island

This wasn't a riot or a protest. It was a temper tantrum.

And we thought the yuppies were bad for the town...

If you don't want 7-11, Starbucks, and other chains in the neighborhood, then don't shop there.

Recall that even the Gap could not survive on Saint Mark's Place for long.

Oh you poor souls are sticking up for tipped over trash cans and windows... OH GOD THE HUMANITY.

Meh. All looks normal to me (?) Typical E.V. street shots.

The pay-phone damage was definitely part of it. I saw it happen. Also, the front of the awning of the 7-11 but they had a hard time with that as it's so high, and they only managed to poke a hole in it that I think has been patched now.

It would be nice (to the anarchists) to say the violence was aimed only at NYC property and corporations, but they were pretty much kicking over whatever was around. A couple of them seemed about to attack a bodega, but the 7-11 caught their attention instead, which is lucky for the bodega guys.