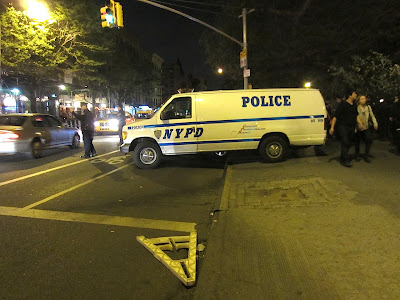 The NYPD has shut down Tompkins Square ... witnesses report unrest in the neighborhood spilling over from an earlier march today that started at 7 p.m. at Washington Square Park... details still coming in...

There are dozens of police officers now on guard on Avenue A at St. Mark's Place.... the officers that we spoke with on the scene won't say why they are currently blocking the park... the NYPD closed every entrance to the Park in the last hour... 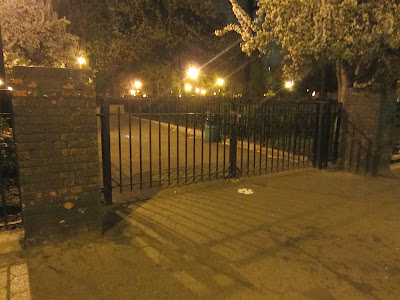 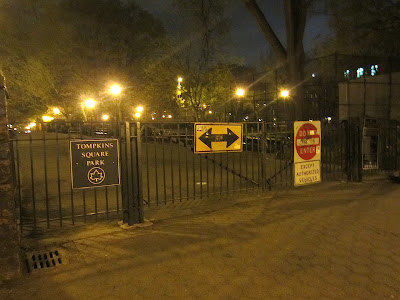 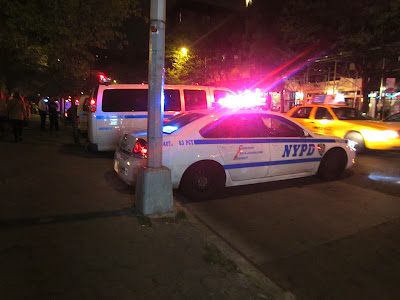 Several people around the park said that protestors have smashed windows at the Starbucks on Astor Place... as well as the incoming 7-Eleven on St. Mark's Place... 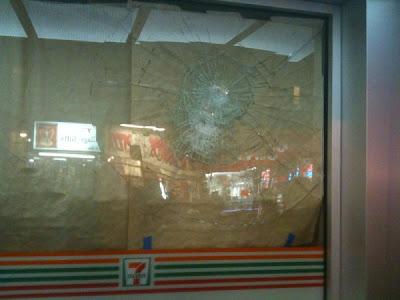 There are conflicting reports what is happening... some have said it is related to #OWS ... Cops aren't talking... Anyone with more information?

Various readers have said that the activity tonight was related to an "NYC FTP" protest...

Multiple residents say that East Sixth Street between Avenue B and Avenue C is closed...

@ChristRobbins is on the scene... He reports that "witnesses say it was an anarchist book after-party at 6th street. Two men say police 'beat people.'"

"It was a very loosely organized anti police protest."

Christopher Robbins at Gothamist reports that the NYPD arrested two men outside the Sixth Street Community Center last night. The community center was hosting an after party for the Anarchist Book Fair. However, attendees at the community center say the events on East Sixth Street and the unrest on St. Mark's Place were unrelated. There were reports that people were throwing bottles and other items off the center's roof, which employees say would have been impossible. An employee of the community center told Gothamist: "The police just came and brutalized two guys who were standing outside the stoop."
Posted by Grieve at 10:05 PM

About 30 mins ago, saw about 30 unied rookies book it across 6th street to the block between B and C. Were clearly looking for someone (flashlights into gated park and up into windows) - there had been some altercation in front of the church of God. Cops ended up taking two scrubby looking guys into custody, though i'm not sure it was who they were initially looking for. Sirened vans and supervisor cars had followed closely behind, the street was still blocked off when I left.

7-11 is the only chain store besides pinkberry that I welcome to the neighborhood. I welcome the slurpee and nacho machines. I admit it.. I love 7-11. Do what you will w/Starbucks though.

OWS was at Central Park today. This was NOT Occupy Wall Street related.

Dear dinkleberry Anonymous,
You said...
"7-11 is the only chain store besides pinkberry that I welcome to the neighborhood."

We do not need 7-11,In our community. our neighborhood is not a gas station or a shopping mall.
You have a chain store mind set.
The Banks on every corner & your chain stores are pushing the rents up and forcing out real "EV RESIDENTS & OUR SMALL STORES"

That's right, 7-11 enthusiast-- though you and your loathsome ilk may enjoy Slurpees and cheap nachos, the royal "we" have no need of them.

I got really excited when I saw the "Starbucks window smashed" headline, but was let down when it wasn't the new location at 1st ave & 3rd st. The Astor Place Starbucks has been around long enough & technically resides outside the bounds of the East Village; I spend so little time at that tourist crossroads that the Starbucks doesn't even bother me.

Starbucks and 7-11 are not pushing up rent, they are symptoms of already raised rent.

It's not urban vs. suburban, it's capitalism.

It seems to be fashionable on this blog to bitch about anything that smells like a chain-store. What if one of the local EV original businesses (say The Bean, an unlikely example, but fine) became wildly successful and expanded nation wide? Then what? You will bitch about them because they're too big and too corporate? Having specific complaints about 7-11 for offering low quality crap is one thing, but spewing venom against any new business, whether corporate or small family owned (and that includes anything from local restaurant, bars or whiskey places) in the EV that doesn't fit an intellectually elitist view of what the EV used to be 20 years ago is another.

Actually, Uncle Waltie, I was being sarcastic. I couldn't care LESS if 7-11's open wherever the hell they please.

Hey, here's an idea-- why don't busybodies mind their own business and allow THE MANY to determine which businesses will succeed or fail by choosing where they spend their money? What could BE more democratic than that?

Thank you Lisa. Yes, I am the Slurpee fan. Was surprised that I am controversial. I think that the angry mob breaking windows are part of the problem. The neighborhood is going downhill, but Slurpees are not the enemy. Seems to me that two issues are the problem- 1) the new second ave subway will be here soon, which will destroy the residential quality of the EV as there will be more bridge/tunnelers coming through and 2) the rezoning of the EV to allow taller buildings which will turn the EV into more of a business district. The only upside is the delicious Slurpee.

the second ave subway will not be here for at least 30 years and the rezoning prevented taller buildings. It is called a contextual rezoning to maintain the current character of neighborhood.

nice of the police to randomnly beat people without any repercussion whatsoever.
since when is this okay?

anyone who is angry at a 7-11 probably has developed psychological and/or substance abuse issues the profundity of which cannot be ameliorated by either a lack of 7-11s or over the counter medication.

@glamma: Did you witness the police randomly beat people or are you parrotting the script?

It's funny that people defend 7-11s as somehow "democratic" as more people presumably choose shopping there as opposed to, say, dear departed Prana health foods (which I still miss). The reason these places stay in business is due to corporate-friendly tax breaks, subsidized and cheap ingredients (high fructose corn syrup, looking at you), bulk rates, low pay and benefits, and a system where if you show investors you plan to open 1 million stores, they'll invest more in your business. It's not about what the "masses" "want" at all. Jeez. From the way people talk on this comments board, you think their biggest bliss would be a tent in the middle of a mall!

I propose that the St. Mark's 7-11 be replaced with an authentic Italian Restaurant: "The Olive Garden".