A strange encounter on an East 11th Street elevator

A reader told me about this incident shortly after it happened ... and asked if I had heard about any other such encounters with the man who will be described below. The reader waited until he had video from the building security before sharing this: 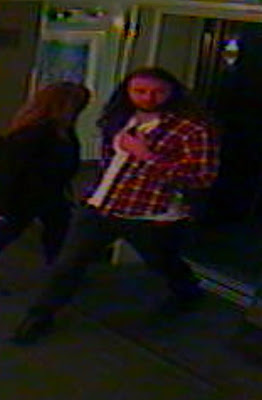 On Sunday, October 14 at approximately 8 pm, I was followed from between 11th and 12th Streets on Avenue A and into my building on E. 11th St between Ave A and B and ultimately into my elevator.

He didn't press a button once we entered the elevator, so I asked where he was going, and he said [totally deadpan] "Your apartment."

I asked him what he meant, but, before he could answer, I quickly exited the elevator ... and entered my apartment. I then called the police, who checked the stairwells, floors and roof. 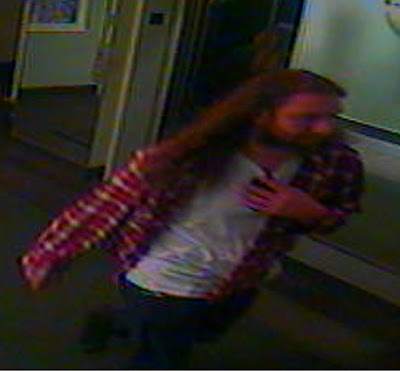 The video shows the man stepping out of the elevator on the reader's floor, and then back inside. His intentions unknown. He left the building.

And what did the police say in response to this report?

"They just said, 'Yeah, this neighborhood is getting sketchy again.'"

Email ThisBlogThis!Share to TwitterShare to FacebookShare to Pinterest
Labels: elevators, life in the East Village

Damn. That's really scary. Thanks for posting this.

I can't quite tell from the grainy photos, but he looks similar to a man that approached me one night several years ago when I was calling last call at my old bar on ave c. He very plainly (dead pan) asked me for "casual sex". I declined. He then returned an hour later, I was pulling down the gates, he asked again. Oddly, even though I was alone at 5am I didn't feel threatened by him, but definitely found the encounter unusual

So let me get this straight. She knows she's being followed at 8pm and continues to walk home through residential streets, although there are plenty of stores still open, into which she could have gone. Then when the guy follows her into the building she does not do anything (i.e. knock on a neighbor's door) then she gets into the elevator with him? Am I the only one who sees a problem here?

Does this person's building not have a lock on the front door?

To those who are new to living in the big city please see the Seinfeld episode where Jerry will not let someone into the lobby of his building that he does not know even though they claim to be a resident.

"So let me get this straight. She knows she's being followed at 8pm and continues to walk home through residential streets, although there are plenty of stores still open, into which she could have gone. Then when the guy follows her into the building she does not do anything (i.e. knock on a neighbor's door) then she gets into the elevator with him? Am I the only one who sees a problem here?"

No, I see a problem too. Some creep is following women around and "this neighborhood is getting sketchy again."

I think the person followed by this man was also a guy. It refers to the person as "he" in the intro. Remember, guys can also be victims of crime. We always warn women to watch out, but men have to be careful too.

The reader is a male.

didn't notice I was being followed until just before the elevator opened (I only noticed that it was the guy I saw on Avenue A after the fact). there are no residences on that floor so I was kinda stuck and didn't assume danger until he didn't press a button.

The woman posting this is very lucky she wasn't robbed or worse. Anons@ 10:46 and 11:23 have it absolutely right.

The poster NEVER should have entered her building with this guy hot on her heels. A mugger would have likely made a quick move right in the lobby. This guy had something else in mind thinking he was gonna get in her apt.

A good rule of thumb is to be very aware of who's around when you're about to access your building. Don't go in if you're thinking something's out of wack on the street around you and wait until all seems OK before you go in.

The "He" reference was to the guy doing the following. Check you reading comp.

Anon 12:06, check the article ABOVE the picture and YOUR reading comp (and the fact that Grieve and the reader posted before your comment further clarifying)

Posters take on a lecturing tone when they think it is a female. As EV pointed out in the story and again here in the comments, the person who was followed into the building by the man was also a man. And no matter how careful you are, man or woman, sometimes you are just in the wrong place at the wrong time. These attackers/crooks are very clever, and they can slip up behind you or into a building behind you without you even knowing it.

Actually, "anonymous," you need to (sic) "check you reading comp" (whatever the fuck that means). Both the follower and the followed were male. E.V., the moderator, even confirmed it in the comments. Next time double-check yourself before being a smartass.

11:23, on the other hand, Elaine buzzed up a jewelry thief AND a group of Jehovah Witnesses.

Guys need to be careful out there.

The fact this guy hunted another man for sex is a bit unnerving. Thankfully nobody was hurt this time, but the more comfortable he gets with his routine the greater the chance he's going to escalate to a violent attack or a rape.

And if you think you're being followed home, PLEASE pop into a store, a bar, a place with other people. Don't lead the psycho back to your home.

""They just said, 'Yeah, this neighborhood is getting sketchy again.'""

I have to agree. Over the summer I had a young, "normal" looking guy laying on my fire escape at 4am whistling to get my attention. I'm half dressed, watching a movie, I turn my head to my left and there is he, two feet from me. Nearly had a heart attack. He ran up the fire escape into one of the apartments above me. I started following him up there with a box cutter and found a moment of clarity that said 'this probably isn't a good idea' and went inside and called 911. They came, banged on the doors upstairs. The guy didn't come out and they refused to take a report.

The audacity these people have. Who follows people back to their apartments or slinks down a fire escape to get laid?

um, if some guy said that to me at 3 AM, I'd kncok the piss out of him. Some people need to grow a sack.

mk - mind if i ask if you're male or female? only ask to see if this guy has a victim pattern.

In general, to me it feels a little dangerous outside. In the last year, I've noticed a huge increase in shady kids and mentally ill homeless men. I get followed aggressively and asked for money anytime I leave the house. I have no money to spare, and I'm actually moving out of the neighborhood because I can't afford it, but I think that people naturally assume if you are showered you are one of the rich newcomers who have money to burn. This guy is probably just a random creep, but like people pointed out in one of yesterday's posts there is serious hostility between the haves and the have nots. You are automatically lumped into one or the other category even if you fall somewhere in the middle, which is dangerous. The other day, this guy approached me on the street and demanded that I buy him a drink. I mean, he could've gone into any starbucks and drank from the faucet. When I pretended like he wasn't there he got in my face and started screaming crazy obscenities. I seriously thought he was going to attack me. People around me were just laughing, so I highly doubt they would've jumped in if he did.

@anon 2:57 I experience the same thing. The crusties and the company they keep constantly hit me up for money and/or cigarettes. They think because I look young and have a lot of tattoos I must be sympathetic to their cause. Then when I don't deliver the cash/smokes they get really nasty with me, call me a fag, and in one instance followed me for half a block. It's annoying.

I can't believe you fucking pansy ass
dudes . Why will you bother to even post this crap? Take care of business yourself. grow some fucking cojones !

anon 2:57 here..glad I'm not alone notorious (well not glad, but you know)...I hate the groups of crusties. I look young too, so I think people see me as an easy target who is more likely to give them money. They approach me with miss this and miss that and when I don't give in, they get all bent out of shape. I'm a girl though, so instead of calling me a fag they go the bitch/whore route. Totally sick of it too. I tolerate it ok, but there are times like the incident I described above when I genuinely get scared. Honestly, you can't even argue that it's smarter to give the most aggressive ones money to get them to go away because there are so many of them you'll be broke by the end of the day.

My dad used to tell me that in his day coming up, they used to have an ordinance allowing them to throw you in jail if you had "no visible means of support". Ostensibly, this was used to round up homeless and vagrants off the streets. In our infinite wisdom, we got rid of this as void for vagueness, and, in fairness, they'd probably round up half the East Village if implemented but it'd certainly prevent a lot of quality of life issues that we should not have to deal with simply getting to and fro.

I am female. My incident was several years ago (4 or 5) and he had short hair.But the age you describe fits and he looks very similar.

Pray for your safety going out and coming in. Carry a pepper spray, siren alarm, taser gun or something to hit back. Better be safe than sorry.