We first met Kita the Wonder Dog of East 10th Street in March after her owners brought her home from a shelter.

Since then, she has had a few adventures. Such as going for a swim. Or chasing pigeons, avoiding aggressive terrier mix types and dining out. And buying her first Christmas tree.

And now, a year-end message from her owners. 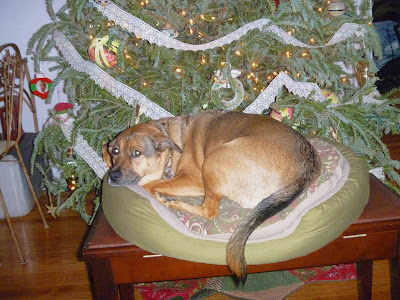 Kita has had a marvelous first East Village holiday. She got some neat presents but none have impressed her as much as the ever more esoteric doggie snacks she gets from that fancy pet food shop on East 9th Street. Her favorite is some sort of a yak milk bar she guards jealously. We’ve tried discussing the carbon footprint of imported yak milk but she is so far unimpressed.

After being shut in during the hurricane, Kita was delighted to go back out into the light of day and exercise her right to vote. 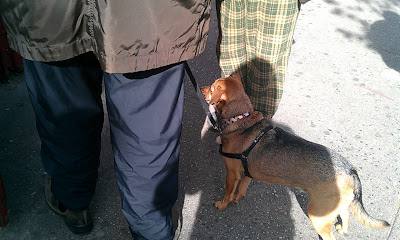 She was a bit dismayed by the long lines but had nothing to compare it as this was her first time voting in this district. We’re pretty sure she voted straight ticket for the Working Families Party but she’s reluctant to disclose that publically given she’s still mulling a run for CB3. 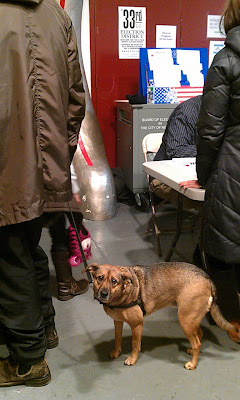 Kita wishes everyone a happy and healthy New Year. And may it be filled with yak milk chews! 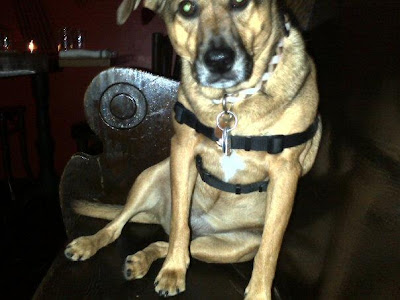 On the next episode: Kita attends her first CB3/SLA meeting, and receives dirty looks when she barks out loud upon hearing an applicant say "We just want the license to pair wine with our homemade peanut brittle."

The further (often truly) amazing adventures of Kita the Wonder Dog of East 10th Street
Posted by Grieve at 6:30 AM

Happy New year to Kita the Wonder Dog of East 10th Street and to everyone reading this!

Kitaaaaa! Happy holidays to you, baby, may you have many more. And to Kita's amazingly smart peeps for rescuing this canine piece of sugar covered in fur, same to you, and if you ever need a free dogsitter, let me know!

Darling Kita, we would love to have you on CB3, but I think you should usurp Rosie Mendez. If Hank the Cat can place 3rd in a Virginia senate race, we can surely get you to City Council.

Kita and Jessie Jane need their own column!

@LvV If Caligula can his favorite horse a senator anything is possible!

Indeed, Notorious. I can just picture Kita going bark-crazy on those damn Santaconners, and it is good.

I adore Jesse Jane. In fact I would love to get to know lots of EV dogs, cats, birds, etc. Like the "Out and About" series, only with critters.

also an update on my favorite EV kitty cat, Mr. TSP Grumpypants, the loner, the rebel, if anyone has seen him lately, would be greatly appreciated, please!

Pets of the East Village! Love it!

And,this is my wish for the new year: I hope the gato in TSP is adopted, if not, I fear for his/her life. My friend's pet died from biting an animal who had ingested poison and TSP is filled with excessive poison and those sadly wounded victims of poison who've yet to succumb. As a former street gato, I have been grateful for the security,warmth and love from a home. Let us not romanticize the obvious. A critter is still a living thing. Even a well-fed cat likes to fool around and bite! Happy new year!! xox Lucie Gato

Wow, that was really cute- great story and so entertaining! Kita, I'd love to meet ya!
I'd vote for you too:)

Does Miss Kita have New Year's Eve plans? I like to think she and family will spend a quiet evening at home, cuddled up on the couch, humming Auld Lang Syne and sipping Manhattans. I love these Kita updates!

Does she have a valentine? Will she be mine?