[Updated] Whole Earth Bakery and Kitchen is closing on Dec. 31 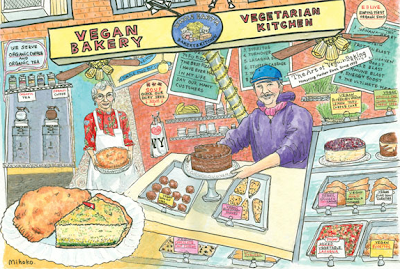 UGH. As we were putting together a reminder about the crowdsourcing campaign to help EVG favorite Whole Earth Bakery and Kitchen at 130 St. Mark's Place (there are just two days left for the Lucky Ant campaign.... and they are well short of their $10,000 goal) ... we heard the awful but not surprising news that the bakery is closing after Dec. 31.

Owner Peter Silvestri, who ran the bakery with his mother starting in 1978, told East Village resident (and EVG reader) Bill the libertarian anarchist that they would have to close for good at the end of the year. The bakery has been at this location since 1991.

It hasn't been easy here in recent years for Whole Earth Bakery, as they faced eviction several times. You can read the back story in this article from The Villager from 2007, when the community rallied around Whole Earth.

The shop faced eviction again last fall... They were reportedly occupying the space under a sublet agreement. While Whole Earth Bakery was up to date on rent payments, the holder of the lease was allegedly delinquent.

In any event, another shop that has been an important part of the community for more than 20 years will soon be gone... look for a soulless high-end dessert shop or bar here soon enough.

A friend of Whole Earth just posted this message on the Bakery's Facebook page:

So much love and good wishes have been coming to Peter and Whole Earth Bakery & Kitchen and he feels so blessed to have had this community support. We are sorry to report that the online campaign never really took off and there is now a change of direction. Unfortunately the store is not going to make it. Whole Earth Bakery is closing at the end of December 2012 after 34 years.

We didn't think the changes were going to be so sudden but we must work with what is. "Play the ball where it lies" as Peter likes to say. The energies now are in doing everything that has to be done to ready for auction next week.

The Lucky Ant campaign was intended to raise enough capital to go forward. Monies are now needed to move, store whatever doesn't sell and reinvent Peter so he can continue doing what he loves in a different way.

Peter is actively doing what needs to be done to get through this time. There will be a mourning period but there are good aspects as well as negative aspects to everything and we are trusting the process.

There is even more of a need for funds now so stop in the store and order your treats for the Holidays... just not to save Whole Earth but to support Peter. Food production will continue up until Sunday December 23rd, pickup of orders until the 24th. The thought is to do special orders of pies and cakes from a commercial kitchen down the road. Would you like something for Christmas or wish to contribute something donated to Occupy Sandy?

well that absolutely sucks.
will be truly missed for sure.

This is really saddening news. From his days in his shop on Spring Street, this fellow has been a welcome part of downtown Manhattan.
My favorite thought of Peter, though, hasn’t much to do with his baked goods or Sunday-night coffee. When the Soho Weekly News shut down in March 1982, one of a series of farewell parties was held at Club 57. Peter walked in and was offered a drink. His reply: “No, I want to buy all of you a drink.” And he did.
Here is a prince of a guy who deserves much better than to be run out of his shop by an unmanageable rent situation.

What is the bakery's location? It's not given in the article!!

Very soon we'll have only Subways and Starbucks in our neighborhood. Thanks for your valiant effort to maintain some diversity. I patronized you whenever I could. The best of luck to you in any future endeavor.

Those that are complaining about this and did not contribute to the crowd funding campaign are complete fucktards!!!

Maybe relocate to Bushwick or Bensonhurst?

Very sad loss to the neighborhood. Best wishes to the owners...