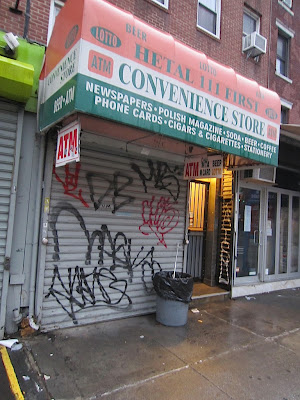 The Hetal Convenience Store on First Avenue just south of East Seventh Street has been closed of late. Earlier this week, EV resident Bill the libertarian anarchist noticed the gate slightly open. He looked inside and saw that workers had cleared out the storefront. (Another reader said that she spotted workers standing in a now-empty space last night.)

The store, which, among other things, featured an array of Polish-language magazines, has been around since at least the early 1980s. Has anyone heard why the store may have closed?

Other merchants that rely on taxi traffic said that despite the negative impact on business, the city is safer overall with the new bike lanes.

"I don't have any problems. The city is better," said Patel, owner of the Hetal Convenience Store on First Avenue near East Seventh Street, noting he's fine with the fact that he has lost about 10 cabdriver patrons a day due to the new lanes.

Do you know anything about flea market cafe and if they are reopening?

I used to get my lotto tickets here. They were always friendly in there - I hope they come back, but I know that's wishful thinking.

"Do you know anything about flea market cafe and if they are reopening?"
I ran into Gilles Ray (the owner) a couple of weeks ago and he told me that he had to go to prison in a couple of days, for his knuckle- headed attempt at arson. He gave me a hug and said that I'd probably not ever see him again, because after he would get released he'd be deported back to France.

They're renovating - there's a sign in the window for Verizon (or somebody; I don' remember) to ask "Mr David" in the Polish place (almost) next door for information. The person I've always thought of as "David," without the title, said that they'll be opening up again with a new person running it but the same sort of store. He thinks they were run down and are just sprucing it up a bit.