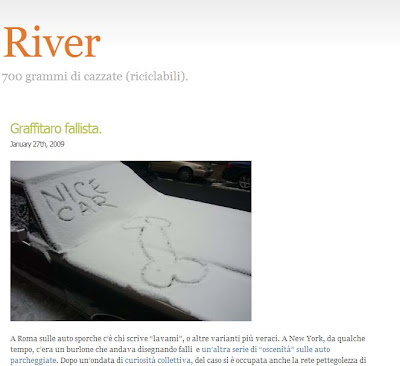 Thanks to the good people at the River blog for reporting on this news that deserves global coverage, especially overseas. Anyway, my Italian isn't so good. So I have no idea what this post says.

Our intern ran the post through The Yahoo! Babelfish translator...and it goes something like this:
-----
To Rome on the dirty cars there is who writes "washes to me", or more varying others veraci. To New York, from some time, there was a joker who went designing make them and an other series of "obscenity" on the parked cars. After a big wave of collective curiosity, of the case the net has been taken care also pettegolezza of Tmz, that it has sguinzagliato for Manhattan its photographers. At the end the graffitaro-penologo has been pecked: it would be such Haley Joel Osment, university student and protagonist of "The Sixth Sense".

Previously on EV Grieve:
A stunning development: Is Haley Joel Osment the Penistrator?
Posted by Grieve at 5:25 AM

The tagline for the blog roughly translates as "700 grams of (recyclable) bullshit".

How apropos. Cough cough. Sorry Grieve didn't see you there!

I see genitals. They don't even know they are genitals.