EV Grieve reader John M. writes in ... he's upstate visiting relatives for the holidays... "and what greets me on the front page of the local newspaper, The Daily Gazette?" 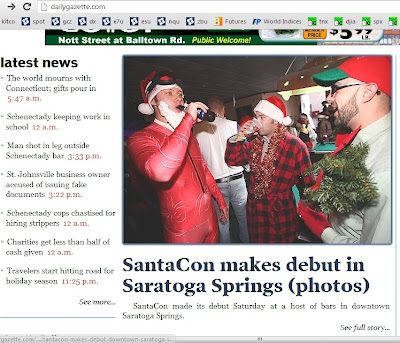 The article is only available online to subscribers... the gist: A local named Michelle takes credit for 'borrowing' the idea from NYC, saying, "I usually go to the one in New York City, but I had my sister and niece visiting from Sicily. I couldn't miss out on all that time with them, so I got really bummed, because I would miss out on an annual thing with all my friends."

The article reports that she then organized her own event, initially for just a few friends, but that snowballed pretty quickly.

"In keeping with the theme of the New York City event, which is a fundraiser, [she] reached out to the Franklin County Community Center and promised to donate food, even if she had to go out and buy everything herself," the article states, and notes that a pickup truck filled with non-perishable food items by early afternoon.

Last paragraph of the story: "[She] hopes that in the future all the local bars will be open early for the event, and she also wants to see it expand with carolers in the streets, like in New York City."

"She calls drunks screaming snatches of Christmas songs at the top of their lungs — even in subway cars — 'carolers?'"
Posted by Grieve at 2:00 PM

Email ThisBlogThis!Share to TwitterShare to FacebookShare to Pinterest
Labels: SantaCon

She couldn't binge drink in public with her sister and niece? She had to drag the whole town down with her???

Santacon hit Babylon in Long Island this weekend according to my sister. Sort of a two-legged home and away matchup with NYC over two weekends I guess.

Hopefully the Commissioner doesn't make it a 3 game series next year.

maybe next year the folks from long island, new jersey, and wherever else can go join her in saratoga springs and give us a rest.

Pretty soon alcohol will be illegal and then there won't be anything to complain about.

I'm all for people upstate and out on Long Island keeping their business out there, at least when it comes to bar crawls. The vast majority of people who seem to not be able to hold their liquor on any weekend in NYC are the non-locals. Would like to see how Santacon or Leprecon or any of these other events go off without a lot of commuters coming from elsewhere. It's more the crowding than anything, otherwise these people would be contained within the bars and few would notice, like any NFL Sunday.

This sort of makes sense since Saratoga is a college-town of sorts... plus, there isn't a whole hell of a lot to do in Upstate NY... Y'know - the whole reason people leave Upstate and move to places like NYC...

Unlike NYC they all have to drive to get around. Good time to become a mortician.

So original Michelle! Another sheep. Zero points for originality. Do us a favor and stay up there.

Santacon should be more like the Jingle Bell Jog.