The realignment of the future East 14th Street between Avenue A and Avenue B is shaping up ... In November, Petland announced that it was moving to First Avenue... and now, workers at Bargain Express right next door are telling costumers that they have lost their lease and will likely close after the holiday season... (One reader said that they will close next week.) 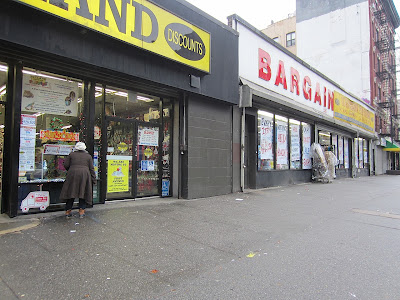 A manager told one EVG reader that "a developer" will be tearing down the building... 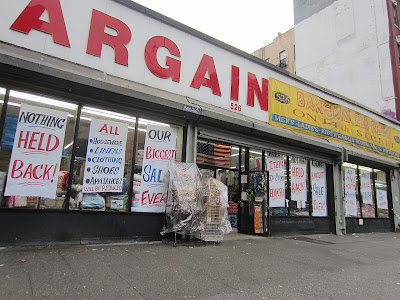 The latest rumor, via g whiz in our last post on this topic:

Rumor is the animal hospital, Petland and Bargain Bazaar is going to be one big unit and the corner of 14th and A over to the Blarney Cove (including/excluding unsure) will be another big unit

Updated: We have learned more information about this block here.

And have you heard the taped message at the Bargain Express? There's a continuous loop announcing the various sales as you enter the front doors ... "Once again ladies and gentlemen, I would like to remind you that this is our biggest sale ever... we are selling to the bare walls..." 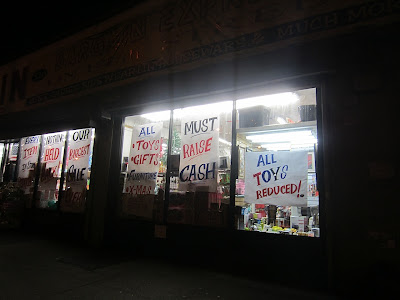 Petland is moving away from East 14th Street, fueling more new development rumors
Posted by Grieve at 6:40 AM

Was in there days after Sandy and it REEKED.

Must have sustained some severe flood damage.

Between the nasty water and potential mold, not sure there was any coming back from that. Anyone been in recently? Has the smell dissipated?

Gutting or a complete teardown might make sense in this case.

The smell is gone, and soon, this great place will be too. Sonuvabitch, this sucks.

The developer can apply for a varience, though.

Thanks for the info, Ken.

You KNOW they will be applying for that variance, and you KNOW they will get it. So there's at least 3 places in that one little stretch - vet, Rite Aid, Bargain Bazaar - I have patronized for years that will be taken away from me, and I guarantee that whatever will be coming in will be totally useless to my life.

All my underwear and socks (well, at least 90%) were purchased in that store. So, if you see a naked barefoot man in the neighborhood, it very well might be me. Just another nail in the coffin.

Now I'm genuinely depressed. I hate to shop, and there I knew exactly where everything was and managed to get in and out under 2 minutes.