A 'grand reopening' at La Vie

In late November, a tipster told us that the State Liquor Authority had revoked La Vie's liquor license on East First Street. (The license had apparently expired in February 2011, but La Vie had been operating under the NY State Administrative Procedures Act, aka SAPA).

As we understood it, La Vie can still apply to have its license reinstated at a future SLA hearing. Meanwhile, there was a "sorry but due to an emergency La Vie will be closed" sign on the door.

An East First Street resident pointed us to La Vie's Facebook page... where there's a post stating that they have reopened as of last Friday ... ("Cash only" per a sign on door...) 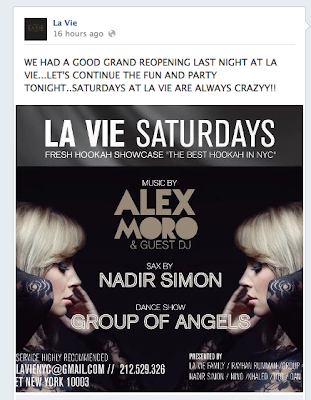 Meanwhile, there's no record of an active license on the New York State Liquor Authority website...

However, a neighbor with knowledge on the ongoing situation here explained it this way:

"They petitioned a court for a stay of the SLA's decision based on financial hardship while the Article 78 proceeding is pending."

Neighbors have long complained that La Vie was operating as a club under the guise of a restaurant. According to residents speaking out at past CB3/SLA meetings, the dance music emanating from the two-level club is loud and disruptive to their quality of life ... and there's often chaos in the streets as clubgoers come and go.
Posted by Grieve at 6:28 AM

How do you determine something like 'Best Hookah in NYC'? - is it number of customers, or price per?

Now I see why it's Cash Only.

What? Me pay for your neighborhood? Ha ha! said...

"Cash only" allows the excellent local business to save on those horrid taxes that everybody hates except the residents who hope that the local police, fire, ambulance, road, sanitation, schools, and other services get funded.

Hooray for "cash only" businesses!

I was there last night and they were taking credit cards...like they always did every other time I was there. Ever think they jus had a problem with their credit card machine or something else after being closed a month? And La Vie is only one floor..only women's bathrooms are up the stairs..