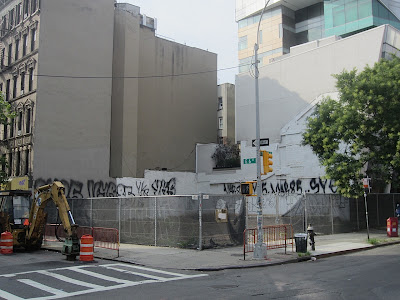 The city has approved developer Arun Bhatia's plans for a 13-floor "new student housing building" on Cooper Square at East Sixth Street, according to public records. The DOB website shows that the plans were OK'd this past Friday.

Bhatia's reps first filed paperwork for a 9-story dorm for an unspecified school in this space back in August 2012, as we first reported. Along the way, the dorm grew by 4 floors.

The paperwork on file with the DOB shows a building with 55 units and 3,517 square feet for commercial space. Kossar + Garry Architects, LLP are the architects of record.

There are many unknowns publicly about the project, such as who the dorm is for... and when construction will commence. The Arun Bhatia Development Organization has developed dorms for the New School and Marymount Manhattan College, among others, through the years.

The dorm will sit on a lot previously occupied in part by 35 Cooper Square, the Federal-style building that dated to 1825. The closing of the Asian Pub in January 2011 at 35 Cooper Square set in motion a sequence of events that led to the demolition of the building in 2011.

Neighbors haven't been so supportive of all this, as various signs left on the fence here have shown the past two years... like this one from March 2012... An aside: The DOB website shows that there is still a "partial vacate" on 35 Cooper Square... dated from November 2008. Per the all-cap DOB speak: "NO 2ND MEANS OF EGRESS AT REAR YARD." 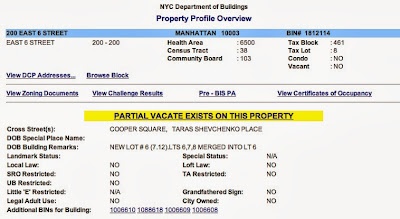 Thankfully the demolition crew took care of that egress problem.

Proposed dorm for former 35 Cooper Square looks to be 4 floors taller
Posted by Grieve at 5:30 AM

So much for the new, upscale Bowery. Suffering retail at one end and college dorms on the other.

just what this neighborhood needs - more under age bar crawl customers with no roots in the neighborhood to woo woo away their nights and recover during the day while they shop in the chain stores that remind them of home.

god bless us all.

Really, what ever happened to "get a room in an apartment for a couple of years"...

How about some optimism? Maybe this dorm will slow integration between college students and real people who live in private buildings throughout the village. That's at least 55 fewer students competing for housing with you!

Better than a vacant lot.

"How about some optimism?"
There is absolutely nothing in the recent past of the neighborhood to justify any optimism.

And I'll bet that soon after the building tops out, the dorm' purpose will be changed to something else.

Or we'll get to see the postive influence that these students will have on the Grace School students across the avenue. Not!

I don't get why this must be a dorm. Is there incentive for a developer to build one and not something else?

That said, is there no incentive to build a nursing home to replace Cabrini?

i'd rather have a vacant lot than these br0 clowns treating the neighborhood like A Night At The Roxbury.

Anonymous 946...
The dorms never reduced the competition for housing, they only increased the cost of housing, often replacing affordable apartment buildings and creating a denser population here. As the schools expand and/or merge they need more and more housing. A win-win situation for the schools.
NYU talks about integration between their students and the community and then provides private bus service for them.

I'd take a pile of rotting, maggot infested rats over college kids!

@ Goggla... you said it. But there is zero incentive for nursing homes, hospitals, geez, even funeral homes in the city at present, sadly.

Seriously...can NYU be stopped? (Not rhetorical.)

I've said it before: the SE corner of that lot is a HUGE sink hole, which led to the demolition of the building on that site.

I'd love to see what happens when they build on this corner....

Do we KNOW this is NYU? Because I live in NYU faculty housing and my hunch is that if it were them, they would go as high as humanly possible. Could it be being built on spec?

Haven't heard anything official about any school leasing the space... NYU is always a likely candidate, of course!

Maybe it's a Cooper Union dorm? Would make sense given it's right there.

I'd rather have art kids staying there than Stern Business school tikes who can't hold their liquor.

I suppose the artist in me imagines Cooper students as infiltrating our neighborhood to quietly take photos of intriguing city sights while they stop in a vegetarian eatery to have a fakin bacon sandwich. Ah hell, I guess I'm just kidding myself. :(

Just envision the monstrosity this building will be when it is built.

Gimme the empty lot with some grafitti...

History is the movement of social forces. It cannot be destroyed.