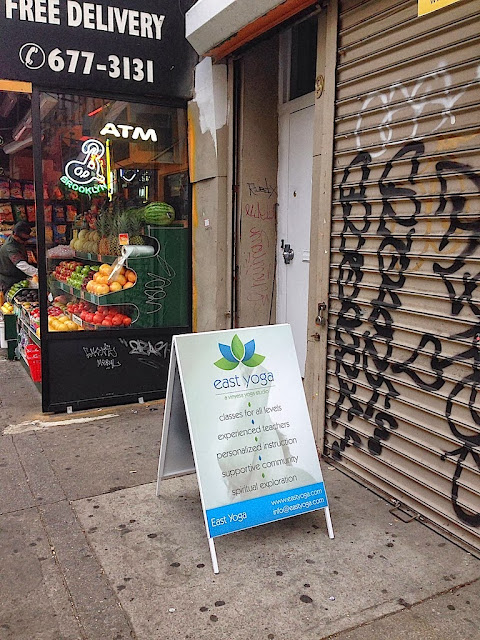 Fire caused extensive damage to the East Yoga space last November on East 13th Street and Avenue B... since then, East Yoga has offered an abbreviated schedule of classes in a temporary location at ABC Sanctuary on East Sixth Street and free classes in Tompkins Square Park ...

Now they've found a new home upstairs at 96 Avenue B next to Sunny & Annie's. 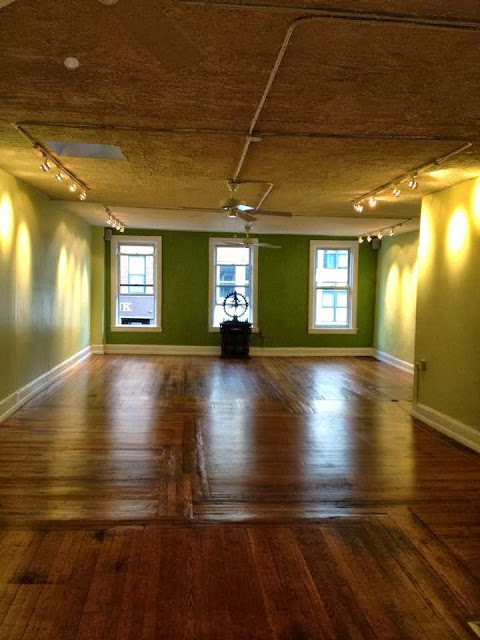 They opened the space this past Sunday... and they're offering "a yogi-style" reopening party on Saturday, Nov. 2.

The Hare Krishnas were the previous tenant in the two-floor building before moving out in July 2011. The ground floor remains on the market.

Previously on EV Grieve:
[Updated] Fire at East Yoga on East 13th Street and Avenue B
Posted by Grieve at 5:05 AM

Email ThisBlogThis!Share to TwitterShare to FacebookShare to Pinterest
Labels: 96 Avenue B, East Yoga

Those were not actually the HareKrishnas, to my understanding. While the guru there did consider the Swami who created the American Krishna movement, and led it until his death, to be among his own gurus, he did not consider his lineage in their direct order, and their practice was not quite the same.
My understanding from their literature, etc.

Moe is correct. That group was an off-shoot.

I remember the vintage shop that was there before:)

The vintage shop was Metropolis - which is now on Third Ave.

This is great news. They have some teachers I love--Clare Ryan, Maja Sidebaeck.

Ps never knew the upstairs was the that attractive, the exterior and ground floor give no clue.