Reader mailbag: Places to eat that have that old East Village vibe 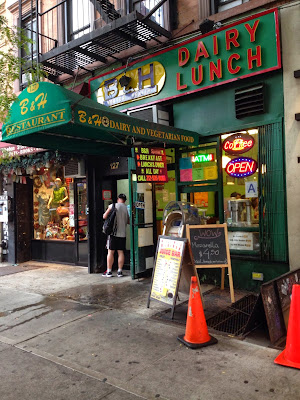 EVG reader Exyallie left this comment yesterday on the post about the sale of 128 Second Ave. ... which also houses the Stage.

Lemme ask a question... I moved to the EV in 1972 (!) and have just returned after an absence of some years and, of course, am in total shock/disbelief.

So I am teaching in one of the local high schools, and I am committed to ONLY eating at places that retain some of the spirit of the nabe when I was there — I usually end up at the B&H across the street from this place... Any other ideas?

And this is NOT to hijack the thread or anything I promise... just wearing out too much shoe leather trying to find places, most of which are long, long gone!!!

Well, there are a handful of such places. Anyone want to offer some ideas?
Posted by Grieve at 5:20 AM

You might want to bring your lunch from home.

Go to the Little Poland diner on 13th & 2nd for reliable eggs and top-notch pierogi.

Pangea on 2nd Ave across from the movie theatre - older crowd, artists and eccentrics tend to find their way to the bumpy banquettes where you can actually hear each other converse. Single diners are not an anomaly. A heartfelt vibe.

After you eat at B&H you should head to Moishe's for a danish or a black and white (or both!) for dessert.

John's on 12th Street and Lanza's on 1st Avenue!

Not a meal but go to DeRobertis Caffe for an espresso and some biscotti.

Caravan of Dreams but it's a bit overpriced for the portions. Stage Restaurant. Stromboli Pizza.

And before you foodies and trendeaters counter with how such a place has bland food or it's not to his/her liking, we're talking about places that retained the spirit of the nabe.

It doesn't get any more old-school and awesome than Veselka on 2nd! Also, across 2nd, Taqueria Diana is new, but delicious.

Esperanto, on Avenue C and 9th.

Zum Schneider, on Avenue C and 8th. Quite likely the best German food in Manhattan.

Nobody mentioned the Ukrainian National Home yet?

I have beer and leftover Happy Wok. Come on over.

So many more just have to think about it a minute

Casa Adela on Ave. C b/w 6th and 5th. Old school authentic Puerto Rican food (and awesome photographs of the neighborhood from the 70's/80's/90's lining the walls). This place is a relic and the food is out of this world delicious and cheap(!)Try the sancocho, pernil, or chicken and rice. (Just don't expect it to be fast. These peeps take their time.)

I like to hit up Neptune for Sunday breakfast - but they're good anytime. I especially like the weekend white borsch with mashed potato.

I would also like to vote for Casa Adela on Ave. C. Very down-home Latino joint with very delicious food.

I LOVE this Reader Mailbag feature! Hope it becomes a regular!

some othe places that I can think of that have been around the EV since I was a teenager (80's):
Cafe Mogador
Sidewalk Restaurant
7A
Yaffa's been around for quite a while
Two boots (for pizza)
Paul's Burger joint has been around a while too
Lot's of Sushi places too
~Robin M

Ciao For Now. Family run cafe/restaurant at 523 East 12th Street. Around for a decade, but feels like home.(My family moved here in 1973).

Not in the East Village, but Castillo de Jagua on Rivington Street seems to have been making Cuban sandwiches and oxtail stew since the beginning of time.

There are many. Among my favorites:

If somewhat newer places are permitted for this recommendation, these have been around long enough to prove their staying power and build a following. Also added some older spots I neglected in the first post.

yes, love this post as well. It should be on the homepage sidebar.

Paul's Burgers deserves more than one mention--the decor is pure 1980s (and the burgers haven't changed!)

Someone mentioned bars? Grassroots goes back to god knows when (the layout would suggest early 20th c., I know the place has been around since the 70s).

For newer, but essential bits of the EV< you have to include Jimmy's #43 (43 East 7th). It's what you'd expect a village joint to be AND the food and beer is whatever Jimmy wants to serve. It just happens Jimmy is a phenomenal cook.

And how the hell can you talk about old village cuisine and not mention McSorleys?! They still werve LIVERWURST! the rest of New York took it off their menus in the 1950s. Their burgers are terrific!

Bars--Grassroots yes, also the Tile Bar, 2A, Vazac's, and the Sly Fox. I really miss the Old Homestead (I think that was its name) that used to be next to McDonald's on 1st Ave near 6th Street. It turned into some faux Irish joint (speaking of which, I still like the Scratcher on 5th St.) for a while and is now some other bar that I haven't been to.

For food and good beer--new places but worthwhile--in addition to Jimmy's I like ABC Beer on Avenue C (they do growlers and a limited food menu with cheeses and such) and also Upstate on 1st. Ave. just south of 6th St, wedged in near the Indian joints. Upstate has a good oyster and craft beer special every day (I think) from 5 to 7.

Also not an eatery, but the 4th street food co-op probably hasn't changed too much since the 70's..

They've only been open for a few years, but Hotel Tortuga on 14th Street between 2nd and 3rd has ye olde EV vibe. Agree with the others here too! Keep it real in the EV!

...the blue and gold bar is still there, right? or has it gone all bro-ville?

Cafe Orlin? No. Just look at that line during brunch. And during non-brunch hours, it's fillied with pseudo intellectual hipsters.

No one has mentioned these, and for a reason, Jules -- used to be a cool place but ever since they've hired that pretentious PR shrimp, it's gone way stilted and trying to be like Pastis and Lafayette and attract those the khaki doucheyuppies and their stiletto-heeled hanger-ons. Jules is now chichi. So is Natori, different management and trying to capitalize to what it was before, but it's nothing like it, not even a shell of its former self.

The last time I was in Cafe Orlin was back in 1994 so I wouldn't be surprised if 1:06 (recently commenting before me) were right.

Hey can someone make a map of all these places? I am too lazy!

Sad if that's what Jules has become. Haven't been there in a couple years. Used to be a cool vibe with the manager who was there through the 2000s who booked all the live jazz. I would go late and sit at the bar when the diners were already clearing out at weeknights. The staff were friendly and often met interesting people and jazz lovers at the bar.

Big YES to Russo's though. I've been here so long and only recently discovered this gem. The pastas and sauces are great, as is the fresh mozzarella.

P.S. Word to the wise: Most East Village places are a nightmare on Friday and Saturday eves and weekend brunch. Those are times to stay in.

I've been to each of these places at least a dozen times, some of them close to a hundred times and counting. I've also been to many of the so-called best restaurants in the city and I prefer most of these to most of them any given day when having fast, good cheap food is the priority.

Mahmoun's Felafel, maybe the best hot sauce in NY
Neptune for pierogies, blintzes and potato pancakes
Pomme Frites, get the free sauce tastings before you order
Mary Ann's for margaritas and stick to your ribs Mexican platters
The Hat, but go before it closes down for good
S'Mac for Mac and cheese
Punjabi Grocery on E. 1st, where the cabbies get their Indian food, get the Samosa chaats, dal, chana and sweets
Xi'an Famous Foods, amazingly hot, real Chinese food
Hummus Place, with fresh hot pitas
Tompkins Square Bagels, try the everything bagel with anything on it
Cafe Pick Me Up, great vegan tofu scrambled eggs
Saints Alp Teahouse, bubble tea and Asian comfort food
Odessa, for late night diner food
Raj Mahal on 6th St. for cheap Indian on a rainy day, get the $7 lunch special

Jules still has friendly staff and service; it's the vibe and crowd that changed. And the PR is to blame. He's trying for Jules to be like in his own image: concern about his personal appearance, thus only attracting only the "attractives" to overcompensate for his insecurity and nefariousness. Thus, Jules is now kitschy and ostentatious. Agree, East Villager, the Jules of then, was way better and maintained the neighborhood vibe, and catered both to the locals and visitors. And that manager that booked the jazz musicians left in 2011. Now the events are created and the musicians are booked by that useless tadpole of a PR.

this thread is awesome.

concur with a lot of these: ciao for now's baked goods are INSANE, rossy is a nice quiet place to sit and read or work, hummus place is surly but damn that hummus is fine, ray's candy store is the old EV at its best. i was SHOCKED at how good the food at jimmy's #43 was (those shishito peppers? to die), still think the pastry at veniero's is better than de robertis (sorry to start a thrash). (and while i'm making trouble, i'm also over veselka.) nicky's (or is it vicky's now?) vietnamese sandwiches isn't old but it has the spirit and it's cheap and delish.

where are you teaching if B&H is across the street?? i'm mystified! regardless, thank you for coming back and thank you for taking on such a tough and thankless gig as being a teacher.

Not old enough but qualifies in every other way: Augers Well beer/wine bar on St. Mark's between 1st and A. Very limited menu but all worth trying. Wed-Sat get the best cheeseburger in the nabe for $6.50 and happy hour every day $4 craft beer drafts. No attitude. No phone either. (A fan, not an owner.)