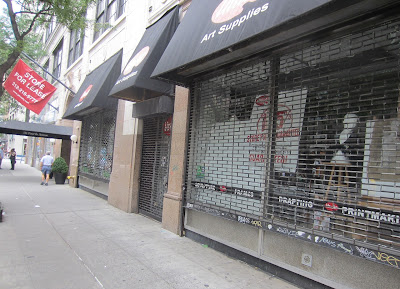 After 30 years at this location, Utrecht Art Supplies moved away from 111 Fourth Ave. last year... during the summer of 2012 Utrecht had moved into a new store on East 13th Street between University and Fifth Avenue.

The space between East 11th Street and East 12th Street had been on the market... and now there's a new tenant: Jerry's Artarama. The 15-store art-supply chain, headquartered in Raleigh, N.C., has signed a 10-year lease for 4,452 square feet of ground floor space. Asking rent for the deal was $125 per square foot, per a release announcing the deal.

Jerry's is expected to open in early December.
Posted by Grieve at 11:45 AM

Applying for a liquor license soon? Just to pair that cerulean blue, with blue caracao, or that fuschia pink with a pink martini infused with a pink wild orchid.

JERRY'S GOT A WEIRD LAST NAME

Glad to hear that it isn't going to be a bar or a club.

This is good news.

It's a good store in spite of the name. The on line version beats every one else on price and they have much selection/