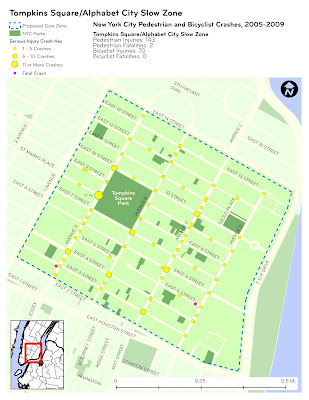 On Friday, CB3 member Chad Marlow learned that the Department of Transportation (DOT) has approved the Tompkins Square/Alphabet City Slow Zone. (Read the background about all this here.)

Here's an update. According to StreetsBlog, there were 74 applications for slow zones citywide. In total, the DOT selected 15 of the zones to be rolled out over the course of the next three years. Turns out the Tompkins Square/Alphabet City Slow Zone is in the highest priority group, and is set for implementation next year. Other neighborhoods receiving a slow zone next year are Norwood in the Bronx, Clinton Hill/Bedford Stuyvesant and Brownsville in Brooklyn, and Jackson Heights, Queens.

The DOT says the applications were evaluated on criteria including crash history, community support, and proximity of schools and senior or daycare centers, as StreetsBlog reported. Slow Zones will include signage, a 20-mph speed limit and speed humps.

Previously on EV Grieve:
Call for an East Village 'slow zone' (34 comments)
Posted by Grieve at 5:05 AM

We not only got a slow zone, but we're first in line! Hooray X 2!

Great, more traffic and pieces of shit that honk!

This is a good thing for the neighborhood. Yay!