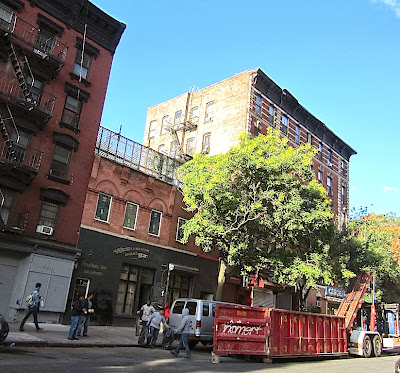 On Saturday, we saw workers hauling out trash and what not from the dormant Pride and Joy BBQ entrance on East Second Street... As we first reported last November, celebrity BBQ chef Myron Mixon was going to open a restaurant/saloon in the former Lucky Cheng's space. (Read that post here.)

However, a lawsuit between Mixon and his partners threw the opening in doubt.

So, does the sight of workers dumping trash from inside the restaurant mean that the BBQ concept is dead? 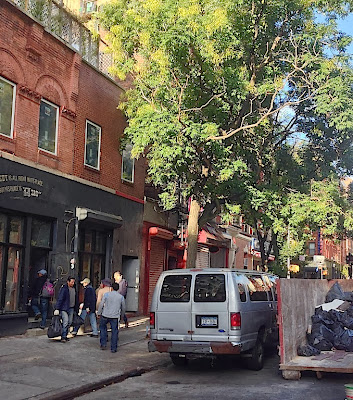 We asked Hayne Suthon, who owns (and lives) in the building on First Avenue and operates Lucky Cheng's, now on West 52nd Street, what was happening with the restaurant.

"[The remaining partners] are moving forward without Mixon to open soon," she said.

DNAinfo is reporting this afternoon that Pride and Joy BBQ just received a liquor license to open a "220-seat 'draft house' and 'honky-tonk' featuring three bars and about 20 TV screens.

During the SLA hearing last Tuesday, lawyer Ravi Ivan Sharma argued for, and received, a 4 a.m. closing time for the BBQ space. Last December, CB3 approved the license but with a midnight closing time during the week and 2 a.m. on weekends.

"That's not what the applicant bargained for when they took on a very expensive lease," Sharma said.

Myron Mixon lawsuit puts opening of Pride and Joy BBQ in question at former Lucky Cheng's space
Posted by Grieve at 5:15 AM