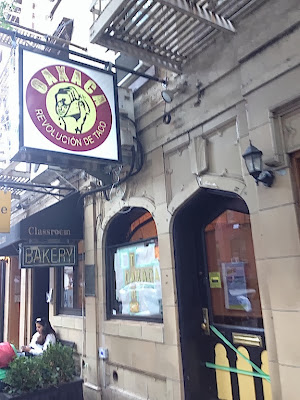 Based on the new signage here along East Seventh Street between Avenue A and First Avenue... it appears that the fifth NYC location of Oaxaca Taqueria is coming soon... 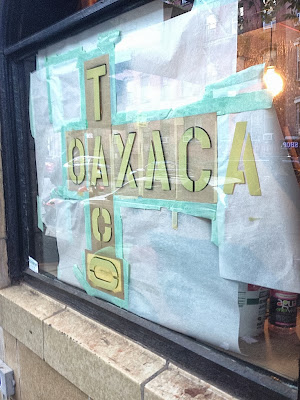 Oaxaca Taqueria expanded from Brooklyn into the East Village and Extra Place in December 2010... This space was previously home to the Butter Lane cupcakes classroom.

...and the taco revolution continues in the East Village... with the recent arrivals of Tacos Moreles on East Ninth Street... Sembrado’s Tacos al Pastor on East 13th Street ... Taqueria Diana on Second Avenue ... El Diablito Taqueria on East Third Street... and the incoming Otto's Tacos on Second Avenue...
Posted by Grieve at 5:15 AM

Well, now I know where to use my OWS debit card first!

In the 1950s, 60s and 70s that was the place where Ukrainians, Polish, Russians and Eastern Europeans were held at rest by the funeral parlors that were on the site. The street and site smelled of embalming fluid all the time, like a reminder of your mortality.

It's easier for the ghosts to pass through the O if it's on its side.

IzF,
That thought occurred to me, but there is room at the top, and these things are planned before executing. I think it's deliberate. Besides, if it was a mistake, it's only paint. They could scrape it off and start again.

Giant T and sidways O are so in these days

Tacos one door from work is a dangerous and welcome thing.

Ah, the cycle of life.

First came the cupcakes. Then the fro-yo. Now the tacos.

This is the last straw. I'm leaving the East Village!

Next would be a cupcake flavored tortilla froyo taco in a hoof.