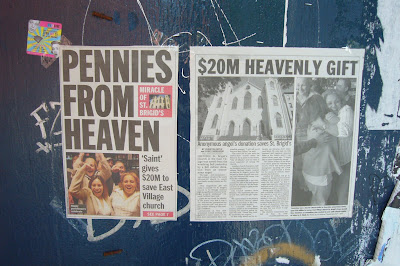 In May 2008, the Archdiocese of New York announced that it had accepted an anonymous $20 million donation to restore St. Brigid's on Avenue B and save it from demolition.

To date, the donor's name was never made public. But there was a lot of speculation... including, but not limited to: Matt Dillon (he spoke out to help save the church), Donald Trump and George Steinbrenner.

Now another name has emerged from a reliable source — Mel Gibson. 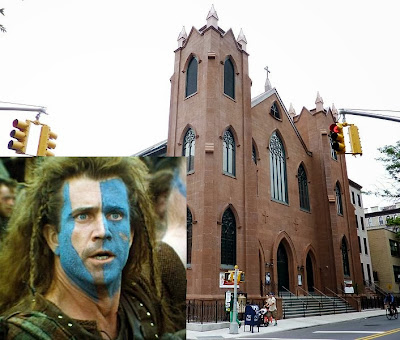 Apparently the actor-director donated to a lot of religious causes, including for preservation... (And this was pre-divorce settlement.)

If this is true, then thank you Mr. Gibson. Nice that one historic church was spared the condo after-life here.

Previously on EV Grieve:
13 keys dates in the 165-year history of St. Brigid's, reopening on Sunday
Posted by Grieve at 5:30 AM

He's no longer a schmuk!

Nay. Still a schmuk but a generous one. I wouldn't be surprised if he was the one who donated the money. He's uber mega rich and super religious (in his own way).

It was a generous gift and made a significant difference surrounding the park, for whom ever made the donation the restoration was tastefully done and stands as something worshipers and non worshipers can appreciate for many years to come.

I think it was a gift from God. You know he's got big bucks.

a good bet on the who the donor was is Chuck Feeney.

Also, in case anyone has a fuzzy recollection of what an astonishing asshole Mel Gibson is, this is a useful refresher:

Too bad Mary Help of Christians could not muster the same passion for its salvation...

^^ just hot air. 'By their deeds you shall know them'

Cartman will be pleased.

Ha! He may have liked this plot to build his townhouse!

Mel Gibson is a hoot in "Machete Kills"!!

I would be stunned if Mel Gibson donated to the Catholic Church. He believes (as does his father) that the Pope is no longer the legitimate leader of the Church. He has gone so far as to build his own chapel in Malibu that offers a traditional Latin Mass and that is unaffiliated with the local Catholic diocese.
Why would someone with that background donate to a regular parish that has remained part of the Church?

maybe it was Pope MICKEY, from dial a joint days spreading the Green...

You know it wasn't Trump. He'd have had his name all over it. And if it was Gibson, that more than anything demonstrates that it shouldn't have been saved. People who lie down with dogs...

I'm going out on an elm limb here to say that I think it was Madonna!

Madonna is notoriously cheap. Ain't her.

I was told who it was and it's not a celeb.

I heard the same thing. Mel Gibson donates a lot of money to different causes, mostly because he feels like he'd fallen on hard times and is atoning for that. And most that's not publicized in his philanthropy is his givings to Catholic churches. He's a very devout and fanatical and radical Catholic, to the point of saying "there is no salvation for those outside the [Catholic] Church." Only his tax returns would confirm this anonymous donation.

C'mon, even hedge funders want to be thought of as famous, right? Corner tables at the Four Seasons, etc.?