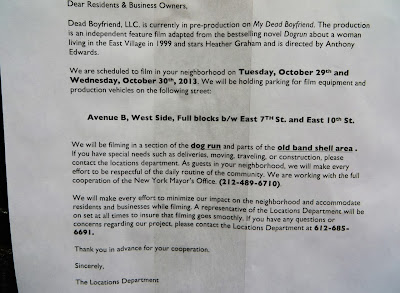 Crews arrived today for a two-day shoot in Tompkins Square Park for "My Dead Boyfriend." There's promise here ... because the film is based on Arthur Nersesian's novel "Dogrun," which is set in the East Village in 1999.

Mary Bellanova came home to her east village apartment, cooked dinner, and fought with her boyfriend, Primo. But soon Mary realized that Primo's silence in front of the tv set was more than just one of his bad moods: Primo was actually dead.

Suddenly Mary's life — defined so far by a string of temp jobs and unfinished short stories — takes off on a tantalizing adventure as she follows a trail of Primo's ex-lovers ... in this powerful new novel edged with black humor and poignancy. 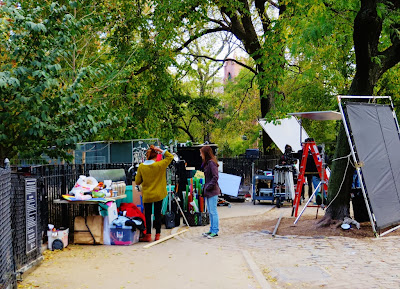 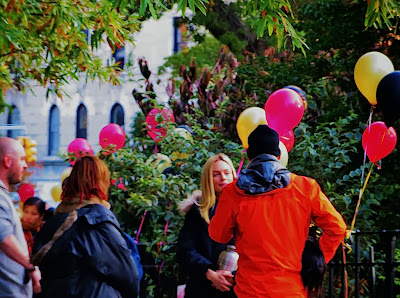 Arthur hits the big time! Great to hear. It is wonderful to see an East Village author doing so well.

Finally someone recognized the allure of the EV as a movie / TV-show backdrop. Been wondering how long it would take....

Usually shooting in the neighborhood goes over smoothly. Boardwalk, SVU, Blue Bloods, all shoot reguarly without a hitch. But this film took over the park all day. How awful to have the one outdoor space we all share inaccessible not only today, but also tomorrow. My dogs were probably not alone when we got 'rejected' at the gate... not once, but twice. The only bright spot was seeing the guy on the bike riding around to the dismay of the production assistance guarding the perimeter screaming "Whose park...? Our park!" as soon as they screamed action. I'm sure it'll be a great film, but next time let's not close off the entire park.

I am sooo happy to hear about this too.

Who's interested in showing up tomorrow to do a little acting of our own when they yell "Action"?

"Dogrun" is a better name.

Go to Toronto, it makes a fine East Village?

Don't they have any respect - it's the first anniversary of Sandy

I loved, love, love, this book. And dogrun is a better title.

It's not right that they closed the entire park. Should have been just a section. This is not just a film set, it's the green oasis in our Village.

For many years I'd hoped they'd do a film adaption of Arthur Nersesian's The Fuck-Up, but the New York City of that novel, set in 1983, sadly no longer exists.