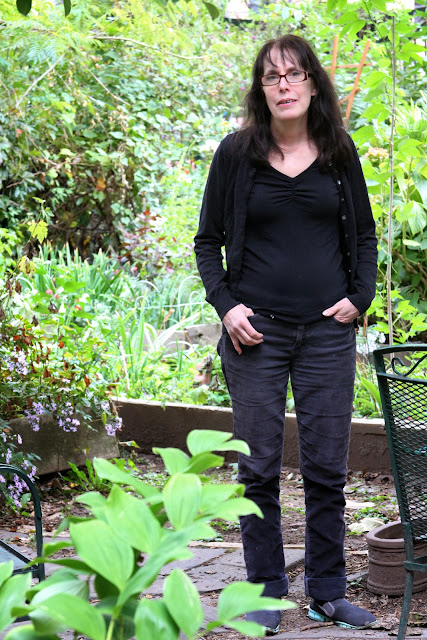 I’ve been in the East Village since 1980. Although I’ve lived in different apartments, it has always been in this neighborhood. I first came to New York in the 1970s to visit from my home in Detroit. A lot of artists were coming to New York at that time, a period in which you could actually come and buy lofts for 30 to 40K.

I came here to simply be an artist and I fell in love with this city. I had had a solo show in Detroit, but when I arrived in New York, I started designing costumes for theatre and dance troupes, which I did successfully throughout the 1980s.

I first ended up on the Bowery and First Street in 1980. The Bowery was pretty crazy at that time. People [living on the street] were burning wood in barrels to stay warm, and there were a lot of bums. I had no heat or hot water in my apartment, nothing but a wood-burning stove. I collected firewood at night with my daughter who was then 3-years old. I remember walking down Bowery … also right at the corner of Houston Street and the Bowery was a place that sold live chickens.

New York was really, really edgy and very exciting at that time. There was a lot of crime. You really couldn’t turn your back on anything because it would be taken. But the bums along the Bowery never bothered you; they were just hanging out. You know, they’d set up ‘living rooms’ with couches, end tables, and table lamps even though they had no electricity … just these random living rooms on the sidewalk made from stuff that was pulled from the garbage.

In 1981, I moved to Fourth Street and Avenue B, and though a real slumlord owned the building, I sometimes had heat and hot water. My rent was higher than others who had lived there longer, but those people were getting harassed. There was one woman, Carmen, who used to go around the building slamming a baseball bat in the hallways and in the stairwells all the time, saying, ‘Mother-fucking landlord.’ People were writing graffiti all over the building’s interior walls that said, ‘Lynch the landlord; Fuck his wife.’ [One of the reasons renters were so upset was because] the owners were placing junkies in the building in order to harass the renters.

Tenants started organizing. And even though I had moved to a new apartment, I still had friends in the building, so I helped out. There were a lot of artists and older folks there at that time. I was photographing the building and keeping a record of the violations because we were going back and forth in court.

We got together one day to try to get rid of the junkies. All the tenants gathered together out front. [At that time] there were marches all over the place. Everybody was getting involved. It wasn’t the way that it is now — where people move into the building and they are paying very high rent, and there’s a very big difference between them and you.

At that time, even though we were paying more rent (maybe $300 a month) other people were paying much less, like $100. We were trying to help our neighbors who were very afraid. They were getting eviction notices and some didn’t speak English. They were being harassed. Many times I went to court to help explain things and make sure that they didn’t get ousted from their apartments. We were all trying to take care of each other.

Joann Jovinelly is a freelance writer and photographer who still calls the East Village home.

Check out Sally's website here.
Posted by Grieve at 6:45 AM

One of the most interesting interviews yet! Looking forward to part 2.

Wow, Shaoul and the other greedy, no-class landlords have no idea how easy they have it these days.


"New York was really, really edgy and very exciting at that time. There was a lot of crime. You really couldn’t turn your back on anything because it would be taken"


so true, and it was exciting back in the EV 80s to see what happen to your car overnight (if it was still there), like the battery missing, radio ripped out, who was sleeping in it, what tires were missing or window blown out because I left 53 cents in the center console...ah the good ole days.

Yes, remembering all the "NOTHING TO STEAL" signs that people would post on the inside of their car windows (everything was about getting $10).
And thanks so much Sally; If you hadn't scouted out 60 Ave B, Raken would not have found herself there, and I would not have met her all the 30 plus yrs ago...

Julius, yes! I remember those signs! Ha! Yeah, those were the days, lol.

sally - you are a pioneer - a community pioneer --
activism, not gentrification, is all important.
you are worthy of true admiration!