Reminders: Ignore the East 5th St. Tree Committee at your own peril 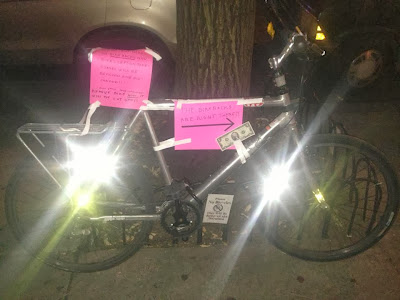 Here on East Fifth Street between Second Avenue and Cooper Square, the East Fifth St. Tree Committee holds forth, warning cyclists from locking their bikes to the tree guards.

As you can see in the above photo via the Committee's telltale pink flyers, a cyclist received a warning. When the bike remained in place for several days... Well! 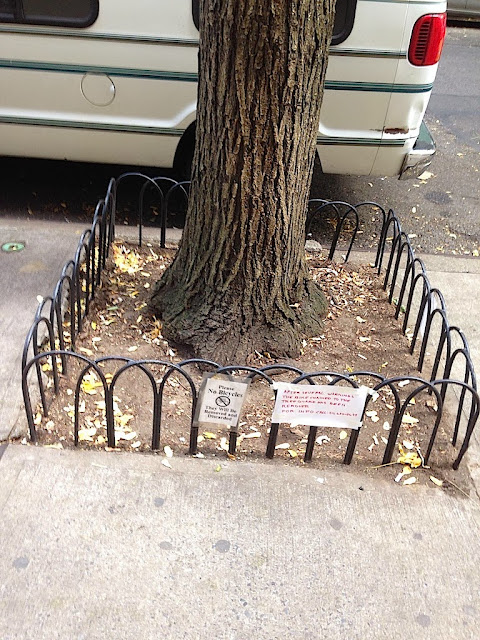 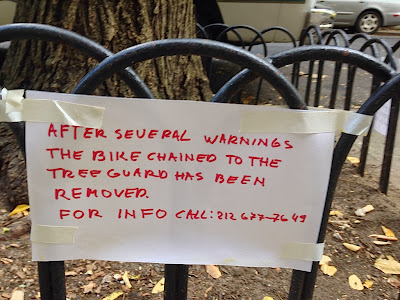 And now, a word from the East Fifth St. Tree Committee
Posted by Grieve at 5:06 AM

If you live on a block with the new expanded tree openings and city provided guards please advise people not to chain their bikes to them. The guards are made up of a combination of wood and plastic somehow and a glance look like metal but a not at all strong. Taking a bike from one of these new guards (no pun intended) would be an easy "smash and grab" for a thief.

What's up with the $2 bill? Hahahaha. Also, sometimes bike racks are full, tough luck. These are public sidewalks, quit fuckin around. Yes I know you are responsible for what's in front of your building.

the guy with the bike oughta take the tree in response

I wonder if it is still the same older lady who would scream and curse at me when I used to park my bike there every so often for half an hour or so to walk my friend's dog. I would lock to a steel railing around the tree, never touching the tree itself mind you, well she would go crazy. There were no meters, parking sign poles, etc., so that was the only choice. Well that was about 10 years ago and she was I guess late 60's then, so if she is still at it, I guess her crusade is keeping her young!

Whoever removed the bike is guilty of theft!

This is a block that could use those new-fangled bike racks. The ones at the 2nd Ave end are always full.

@12:26PM - EXACTLY! And after being contacted and getting their bike back - the owner should take appropriate action. Nanny state morons...keep your hands to yourself and don't take what does not belong to you. Plain and simple, yeah?

@ 5:03 PM
Yeah.
Instead, just lock your bike up to what doesn't belong to you. Makes much more sense.

That is city property NOT private property, @7:17. Bikes have been locked up this way for decades - welcome to NYC

The tree guards are not city property. They are paid for and installed by the block association from neighbor contributions. They are, in fact, the property of the block association.
When bikes are attached it is impossible to water and care for the trees.
Hope we can get more bike racks and stop this useless animosity.