Alphabet Pizza and Deli setting up shop at 20 Avenue A 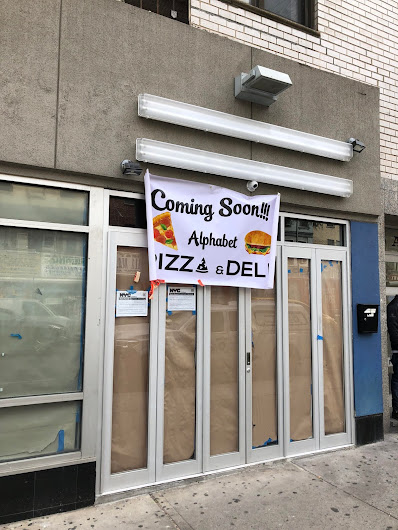 Alphabet Pizza and Deli is a new tenant for 20 Avenue A at Second Street. The coming-soon signage arrived late last week.

We noted back in July that workers were "TO INSTALL PIZZA OVEN AND DELI EQUIPMENT IN EXISTING STORE" (per the ALL-CAP DOB style) in this space.

This quick-serve business only accounts for part of the former Chase branch. There's still roughly three-fourths of the storefront available for another tenant.

Alphabet Pizza and Deli is a little more pedestrian (not a criticism or complaint!) than what had been envisioned for the address. In early 2016, the broker — one of many — for 20 Avenue A showed the potential here for more-upscale wine-bar and retail tenant action... 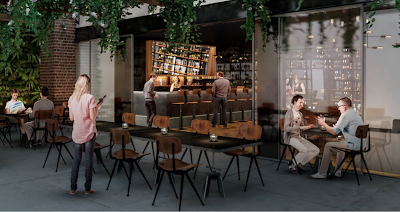 Of course with the remaining parcel of space, there's still the potential for rendering reality (though, honestly, probably not).

Looks like your town is getting eateries that actually reflect the incomes of the majority of New Yorkers. This restaurant is no different than the pizza-burger-chicken joints in poor and crime-ridden neighborhoods.

What a cheesy banner too. I speculate this pbc joint will not have some michelen five star artisan chef.

correction- this is a pd joint.

or go over to Avenue B to Solo Pizza and have a delicious slice (their grandma slice is fantastic!)