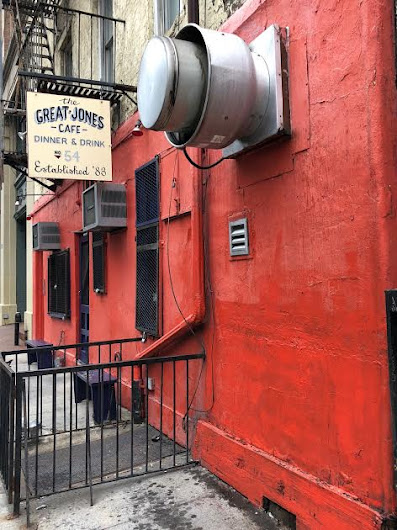 Community Board 2's SLA committee signed off on the corporate change Tuesday night for new ownership to take over the Great Jones Cafe.

The liquor-license approval wasn't without some debate, mostly over hours of operation and the current kitchen venting system. (In September, both the applicants and CB2 agreed to a layover on the application for exploration of the above topics.)

Avi Burn, one of the applicants along with Anthony C. Marano (who owns the building at 54 Great Jones St.), Scott Marano and Jonathan Kavourakis, told me yesterday that, in the end, it was an "even deal."

Aside from amending the hours of the previous Great Jones Cafe (from 4 a.m. to 2 a.m. Sunday through Wednesday), the new owners will move the kitchen vent from the front facade, which Burn said "has been a huge nuisance to the neighborhood." Nearby residents had complained about the noise and smell from the vent in recent years.

"We will spend what will probably be close to $80,000 on the vent, which was not illegal in this case, because we would like to have a restaurant with neighborhood support behind it," said Burn, an owner of Pinks on 10th Street and Pinks Cantina in the Bowery Market. "We genuinely have the best interest of the community in mind but we are also mindful of a business model that will allow us to succeed."

As for the restaurant, the owners — who become the primary investors in J.F. Jones Inc. d/b/a Great Jones — are retaining the Great Jones Cafe name. Burn said that their emphasis will no longer just be on Cajun cuisine — the longtime staple at the Great Jones. During the September CB2 meeting, Kavourakis, a former chef at The Stanton Social and Vandal, described the menu for the new venture as "modern American."

Here are a few more thoughts from Burn...

"Chef Jonathan is aiming to create a menu that people can eat several times per week. We felt Cajun food — while amazing and hearty — is a once-in-a-while treat for many people. Nevertheless we will pay homage to the old menu with some GJ classics and some inspiration from the old menu."

On the legacy of the Great Jones Cafe, which opened just west of the Bowery in 1983:

"The idea was really to keep as much of the spirit of place as possible. We will clean up, make some cosmetic changes, re-do the food and drink menu while keeping some classics and aim to offer a great update to a classic neighborhood restaurant. Great Jones Cafe was in my regular rotation of favorite NYC restaurants. I loved the food, especially the Gumbo. I am very excited to be able to continue the legacy — it was a no brainer to keep it as Great Jones Cafe."

On a reopening date:

"We are working diligently to bring Great Jones Cafe back to the neighborhood as soon as possible."

James Moffett, the longtime owner of the Great Jones Cafe, died on July 10. The restaurant never reopened following his death.

[Updated] The future of the former Great Jones Cafe
Posted by Grieve at 6:00 AM

All these food group can talk about their goals and quality food but in the end it's like a McDonalds. - it's manufactured food. Great restaurants are one-offs run by an it's chef. And the food varies by the day because It's not plotted and planned like the invasion of Iraq... including the "Mission Accomplished" banner. Goodbye Great Jones... Goodbye.

When I see "Chef..." in front of someone's name I'm immediately suspect of him/her.

Cajun food is a "once in a while thing"? Thanks Dad. Besides that you're wrong considering Great Jones Cafe served Cajun food for over three decades.

Seems foolish to buy a restaurant with an established following and streak of success and then change out the unique draw that led to it. GJC was the only competent Cajun joint in Manhattan, if not New York.

People we're drawn to GJC for its ambiance. It was basically a cinder block with string lights. People went because it had a unique (for New York) menu, they made their food well, and had good service. Change that out and make it just another "Modern American" restaurant, and you just have a cinder block serving the same food as anyone else. If that's the case, then what's the draw here? I don't see the point.

"The idea was really to keep as much of the spirit of place as possible. We will clean up, make some cosmetic changes, re-do the food and drink menu..." - wait, isn't that going directly the spirit of the place?