Report: It's 'Crusty vs. Postie' on 2nd Avenue 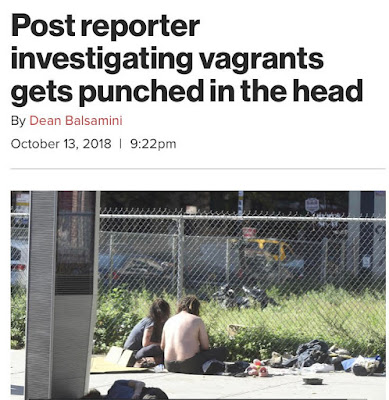 New York Post reporter Dean Balsamini reports that he was punched by a traveler/crusty while looking into the annual migration that has seen the group camped out on the corner of Second Avenue at Seventh Street at the site of the 2015 deadly gas explosion.

A passage from the article published today:

“The fish stinks from the head,” he fumed. “From de Blasio on down. He doesn’t care. He’s too busy at the gym.”

Jose Amigon, co-owner of Paul’s Da Burger Joint, was beaten with his own broom in June when he asked a sleeping crusty to move as he swept outside his store.

Not long after I was crusty-creamed, 9th Precinct Capt. John O’Connell called me to make sure I was OK, saying, “This is upsetting to me.”

[Enz's owner Mariann] Marlowe said my Wednesday-afternoon whipping prompted action. O’Connell has stopped by her store at least three times since, and a cop is now posted on the block.

The Post has a history of conflict with the travelers. In 2015, when the travelers camped outside the new Cooper Union academic building, a group of them threatened a reporter and photographer with taunts and cookies. 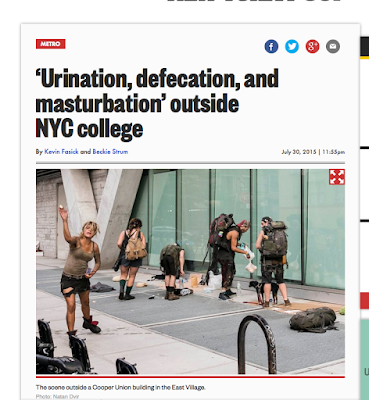 Nine of the drifters were splayed out on bits of cardboard Thursday morning, and began hurling insults, water and bits of cookie when approached by a reporter.

“I was going to chase him down and beat the s–t out of him,” one thin, bedraggled man spat in anger.

“If I ever see you or that photographer again, I’ll kick the s–t out of you,” he threatened.

Finally, somebody is chasing these annoying, smelly, no good lowlifes out of the neighborhood. And by lowlifes I mean NY Post reporters. Kudos to the Crusties for kicking these Rupert Murdoch bloodsuckers to the curb.

Re: Post story. Besides what this reporter claims check out that photo. That derelict turned himself into a pee fountain. Like some sort of crusty statue. That is the picture of the year and the culmination of de Faustio's detachment from governing full time and his neoliberal city planning policies.

Those linknycs have to be taken DOWN.

I asked a friendif he had any Crusties on the upper West. He said he didn't know. Was it a bakery chain? Hmmm. We are the dumping ground for the Fratrats and anyone else who is consider a problem by the real estate industry. These vagrants add to the vibe, I guess. And the residents have no say. We would had a say if we had effective pols who tried to help the community instead of doing the mayor's bidding. The BClub... the garbage trucks... now the Crusties/Travelers. We've been such a dumping ground for so long I'm sure that Jimmy Hoffa is buried here. I'm waiting for Carlina & Company to write a letter and ask for a sit down with Zeke... ONE PARTY RULE. ONE PARTY RULE. RECALL! RECALL!!

A caring/better Mayor than D'assio would have cleared them out of the LES already.

The Post is calling them "young vagrants," but have you seen these people up close lately? It's true that the crusty punks mostly used to be kids in their teens and early twenties (some startlingly good-looking under the hobo clothes, no doubt helping to fuel the "they're all just rich kids from Connecticut!" claims), but over the last few seasons these folks are more bedraggled and hard-living than ever, and many look no different than their boxcar-riding forebears. Look at the photos at the Post and disagree with me that those tubby derelicts are not pushing 40!

At first I thought the writer described himself as Potsie.

Remember, the NY Post ALWAYS has a REBNY/right wing agenda in its news coverage. That being said, I am so done with the Crusties especially with their dog abuse. For further info, see the EV Grieve comments (66) that were posted on the 7/31/2015 thread.

Also, the NY Post, from their reporters view, always provides a positive spin on that Bro/Woo-Hoo shitfest called SantaCon. As per the link, notice how gleeful they were that one of the SantaCon protestors was arrested while providing this quote from hell:

“We believe that SantaCon is an art form as well,” said Stefan Pildes, 41, the president of Participatory Safety. “It’s a creative expression. People get quite elaborate and creative in their costumes.”

The Post needed to use more puns with all this.

What is the story behind the story with these "Crusties"? I doubt the New York Post was doing investigative reporting, most often they are trashy clickbait gossip and propaganda to rile up and shock the reader. The Post is not interested in the facts and are more interested in creating a daily source of the spectacle. .

Love the Post article - funny ! Farm-animal Musk ! Hahahaha !
No sure why its the Post article and author that
are getting kicked to the curb - all the article did
was bring attention to a local problem.

Hopefully DBlas and the Ninth Pct will do something about them.

Screw these people. You can hate the post all you want, but at least they are publicizing this problem and leading to some semblance of action. It's absolutely absurd how the city has completely adbicated its responsbility to handle quality-of-life issues, including crusties, graffiti, and dirty sidewalks. This is particularly problematic in the EV. Any of you people who would rather throw shade at the Post because they are the "enemy" really don't have the best interest of our neighborhood at heart.

Never thought I'd thank the NY Post for anything, but if they're stepping up against the Crusty Invasion, thanks. I'Ve attended meetings at the 9th Precinct and commented here ever since the Links kiosk went up under my window on 2nd Ave, and I was blessed with drunken, unwashed hoards on my doorstep.If it takes attention from the Post to bring some respect to our neighborhood, so be it. The enemy of my enemy is my friend.

The last time the NY Post got involved in this neighborhood’s homelss issues, the result was the installation of that police SkyWatch tower in Tompkins Square Park back in the summer of 2015. That tower just made the park feel more dangerous than it actually was. The tower was the direct result of that NY Post article, and the community had to protest and get a petition together to have it removed. Be careful what you wish for. The NY Post is nobody’s friend

To All The People So Down on the Post ->
better to not have had an article and just
let those filthy vagrants rule the streets ?

At least yesterday there were two beat cops on Second Ave and 7th St -
how is that bad ?

The NY Post gets involved and the next thing you know we will have gated communities (which Stuy Town already is), park conservancies, corporate takeovers of public space, and resident parking stickers, Last time I checked those garbage trucks are still stinking up First Avenue, threatening local businesses and making people’s lives miserable, and we are complaining about this? You want another police tower on 2nd Avenue to make it look just like Avenue D?

Also: It’s really insulting to this community that our local police commander apologized to a NY Post reporter who doesn't even live here, while the Crusties have been harassing residents for years. Did the cops ever apologize to ny of you? Did they ever tell you how badly they felt that you were harassed by LES Jewels or any of his gutter pirates? Think about how ridiculous that is, The Post has an agenda, and it’s not one that will help anyone ho lives around here.

I don't care what the post's agenda is, I'm sick of looking at these scummers laying around on the streets. The bum charging stations need to go and I encourage everyone to take a screwdriver to the recharging sockets.

That these young AND old punks are allowed to infest (and I use that word deliberately) our streets & parks EVERY DAMN YEAR is a sign of how government is NOT working on behalf of the actual legitimate residents of the city.

I wonder what would happen if the local shopkeepers started having the person with the broom be accompanied by a person with a baseball bat? WHY does NYC allow ordinary citizens & hard-working small-business business owners to be threatened & assaulted by these disgusting transients?

We are not a "sanctuary city" - we are a doormat city.

If it were a NYT reporter oh how the tone would be different. Hypocrites. No one deserves to be attacked solely for doing their job. Not a single person here expressed concern for the people who live in the area and have to deal with these people every day.

3 or 4 days, and ZERO Crustis camped out on the block. Thank you, 9th Precinct. And thanks Post reporter, for getting punched in the head, and "taking one" for the team.

@2nd Ave Panther: Really? There was a Crusty carpenter camped out in front of the empty lot on 7th Street making something that looked like a fireplace mantle, and the others were camped right in front of Dollar Pizza on St Marks this weekend. I think they are still around if you look for them.

@ 10/16 @ 10:59 PM: I stand corrected (sort of). I can live with "a (single) crusty camped out in front of the empty lot", and I, and the Post article, was referring SPECIFICALLY ,to the block of 2nd Ave between 7th/St Marks. I know there are still crusties around, but when the brigades of the Crusty Invasion are fully deployed, you don't have
"look for them", you have to walk around or over them. I personally am enjoying the cleaner, less cluttered street, and don't miss the nasty, obnoxious vibe the "travelers" bring. I've spent too much time thinking and commenting about these folks - let's just enjoy the hood I've loved for 45 years.