A visit to Russo’s Mozzarella & Pasta 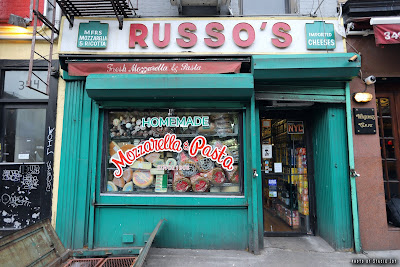 As a longtime fan of Russo’s Mozzarella & Pasta I was excited to be invited to watch head cheesemaker and longtime store manager Jimmy Paleta create their delicious fresh mozzarella. 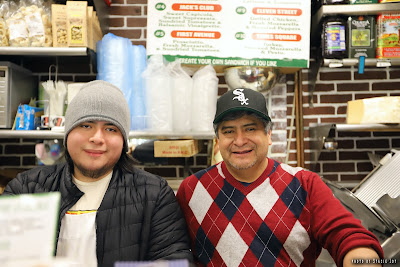 Store owner Jack Cangemi welcomed me in the classic Italian foods shop at 344 E. 11th St. between First Avenue and Second Avenue. We spend a few minutes looking at the varieties of fresh pastas and sauces as well as the meats and cheeses before I am told the cheese curds are patiently waiting for us in the basement. 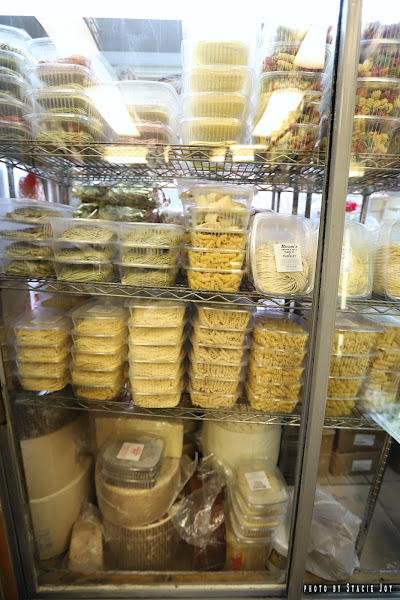 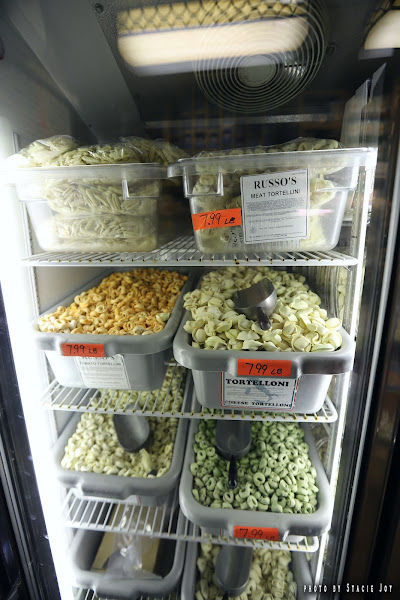 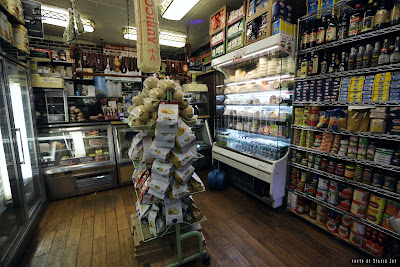 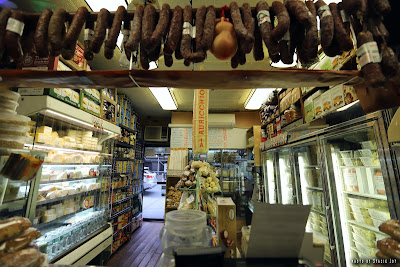 We venture down the steep steps to a basement with low ceiling (no small feat considering Jack is 6-7!) to watch the cheesemaking process, which went surprisingly quickly.

Jimmy soaks the shredded curds in boiling water and stirs until the smooth, ropy stringy cheese comes together. He smiles as he creates individual pound-size cheeseballs and braided twists. Following a brief cold saltwater bath, everything is wrapped, brought upstairs, and made available for sale. 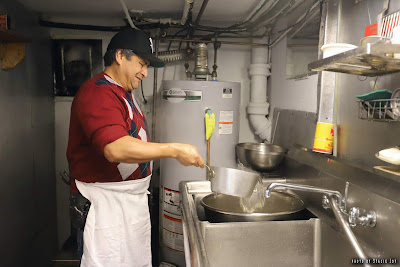 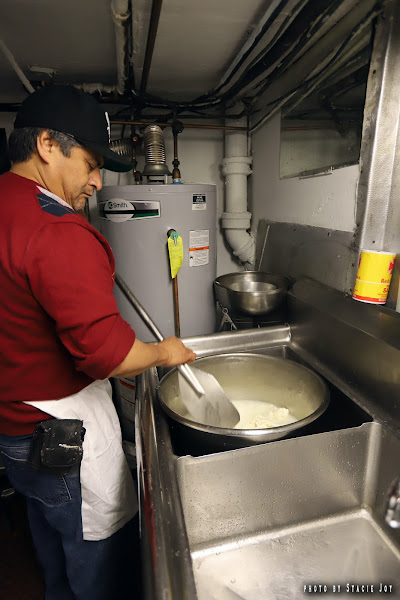 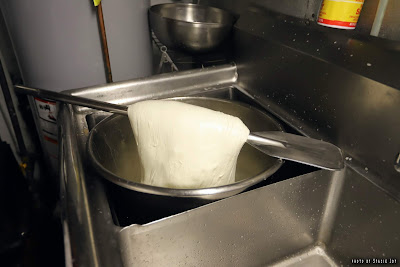 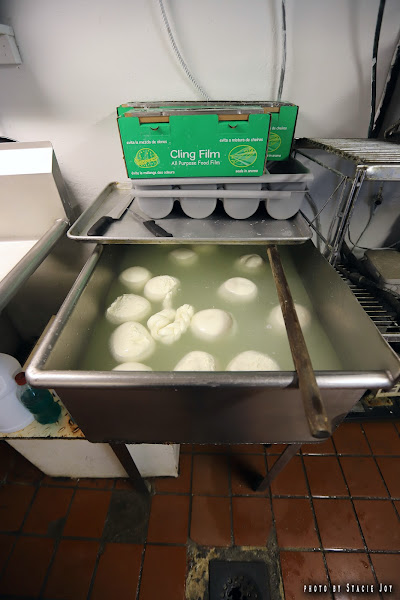 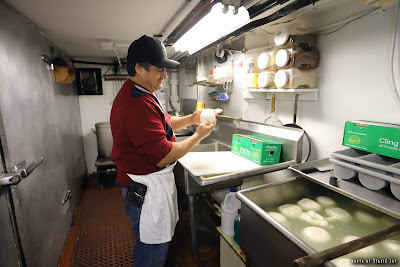 Russo’s has been in existence since 1908. Jack, who grew up on East 10th Street, bought the business in 1986. Jack used to work part-time at Russo’s as a kid and was toiling in an "unhappy, not-fun job at EF Hutton" when the former shop’s owner approached him about buying into the shop.

Jack answers my questions about the business ("lease is good, landlord is great") and speculates on whether his son, Anthony, will one day take over with Jack’s longtime — 25-plus years — managers. He shows me around the tiny shop pointing out his favorite food (roasted artichokes), while Jimmy’s son, counterperson Michael Paleta, slices up some of the fresh mozz that his father just made. 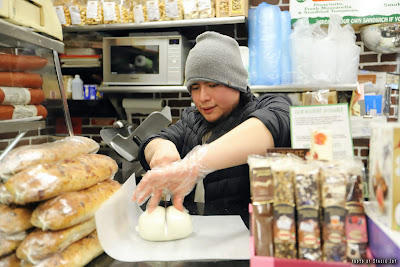 "No such thing as a typical customer — it's no longer just old Italian people, people who have shopped here for 50-plus years," Jack says. "Now we also have East Village artists and musicians, families from Stuy Town, NYU kids — it's a diverse crowd. People know and appreciate good food. And, I like to think, good prices."

Jack says that he doesn't have any expansion plans: having three stores is enough (the original location on 11th Street and two more in Park Slope). He says the plan is never to close. "Where else can you feed two people a homemade meal for $10 to $15, a dinner that includes pasta and sauce and a salad? You can’t even do that at McDonald’s," he says. "You should have a Big Jack, not a Big Mac!" 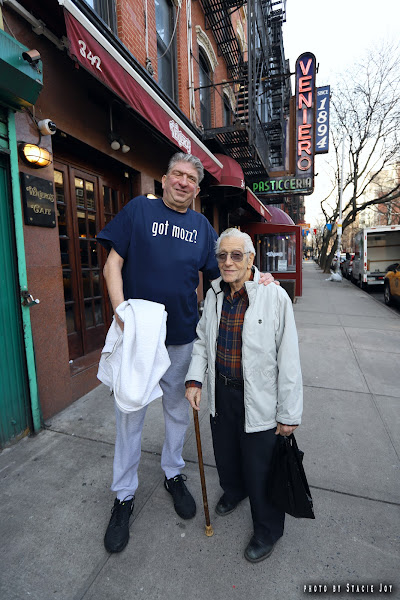 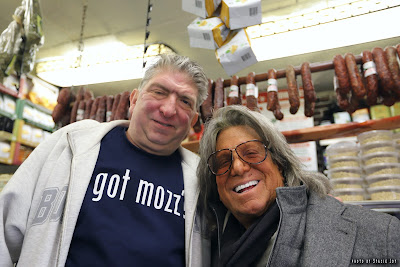 [Cangemi and Wayne Diamond]
Posted by Grieve at 4:30 AM

Email ThisBlogThis!Share to TwitterShare to FacebookShare to Pinterest
Labels: A visit to, Russo's, Stacie Joy

My favorite meal: Russo’s mozzarella and sun-dried tomatoes on rice crackers. Long live Russo’s! and thanks for the story.

Great Post: I too love the roasted artichokes, so much. I remember back in the day, they used to smoke the mozzarella in metal drums out front, and talk about your aromatherapy, I'd stand downwind hoping to smell at least a little bit as good as that cheese!

Anyone else remember when Russo's used to smoke their mozzarella on the sidewalk? They would put a steel barrel with both sides cut out on the pavement over a small banked fire, hang rods with balls of fresh mozz on twine in it, then cover it and let nature take its course. Those were the days when you could do pretty much anything in this city!

I also remember in the early 1980s when Jack was a gangly teenager working the store or hanging out in it, glad to see his is doing so well. One of my fave EV stores, thank God there is no threat of them going under.

Well, I have been shopping at Russo’s for 52 years, since I moved to the EV in 1968, so it’s still being done! And my favorite meal is my nonna’s recipe homemade bolognese sauce with Russo’s large cheese ravioli and grated Parmesan. I cook up enough of it to last the inside of a week, and then freeze the rest. Fabulous.

Love the ravioli from Russos

yep every morning in the big barrel out on the sidewalk!

I go there mostly every week or two for pasta for the last 5 years or so and I'm conditioned from living in New York to be always vaguely scared I'll show up one day and it's just gone. So it's reassuring to read this article and know that everything is going fine landlord-wise and management-wise.

The only place I know of in the EV for a loaf of Italian bread too!

Thanks for regularly posting these great articles about our neighborhood businesses.

I LOVE Russo's, and am so happy to read this article about them! Long may they continue!

Thank you, Stacie Joy and Grieve!

Not sure what I'd do w/o Russo's prepared meals, Meat Lasagna, and sesame bread. Once a week. Always good vibes.

Along with their amazing Italian food, they have the best crab cakes. A neighborhood treasure--please don't ever leave. I remember years ago there was a great little Italian grocery on First Ave. around the corner.

Yes! And the last owner was a Korean man who loved Italian food and had many specialties he made himself and sold. I think olives?? amongst other foods.

Gojira mentioned it—I remember when they smoked the mozz on the sidewalk. I live on the block.

I love Russos the quality is great and Jimmy is a sweetheart. The downside is I have easy access to all this deliciousness and a huge problem with willpower and weight.
Laura Jean Strassberger
Live on the block