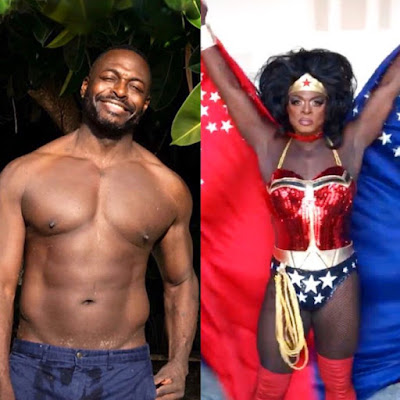 According to published reports, Nashom Wooden, a legend in the drag community who lived on the Bowery, has died. Friends say that Wooden died from COVID-19. (Update: According to the Times, he was 50.)

A NYC former drag star, Nashom Wooden (who was Mona Foot), has died of covid-19. Nashom was a treasure.

Wooden's life looks like a history lesson in fabulous downtown culture. He worked as a salesboy at Charivari, the groundbreaking designer fashion chain of stores where Marc Jacobs folded t-shirts as a teen. He later also worked at Pat Field, the eponymous boutique of "Sex & the City" stylist Patricia Field. He first performed in drag at Boy Bar, a gay bar and drag spot on St. Mark's Place famed for their gorgeous Boy Bar Beauties like Miss Guy, Connie Girl, Princess Diandra and Raven O. He did an off-Broadway show, "My Pet Homo," with RuPaul. He was cast in Joel Schumacher's 1999 film, "Flawless," and co-wrote the title song with his group, The Ones. It was a worldwide dance hit.

Since 1997, he had been working as bartender, doorman and DJ at the Cock on Second Avenue.

You can read about Wooden's drag past in this interview with Michael Musto from 2017.
Posted by Grieve at 6:00 AM

This is sad news, very sad. It should serve everyone as a sorrowful reminder that everyone, no matter their age, gender or health must be careful and take the warnings we are hearing to heart every day.

EVGrieve, how old was he?

I didn't see his age published in any of the reports. Will add that information when it becomes available.

too beautiful, too talented, too young and wild to go. RIP!

Based on the timeline in the Paper article, he had to be around 50.

Definitely a huge loss to the downtown nightlife scene and the east village... RIP Nashom and condolences to family and friends

He was only 50. Just 50!! As a gay man, I knew of his presence in our community. This is so fucking sad. Just very sad. Life is so tenuous. My condolences to his loved ones :(

Rest well. Sounds like you lived a great life despite many obstacles.