Report: These 9th Street tenants don't have to pay rent until building has C/O, judge rules 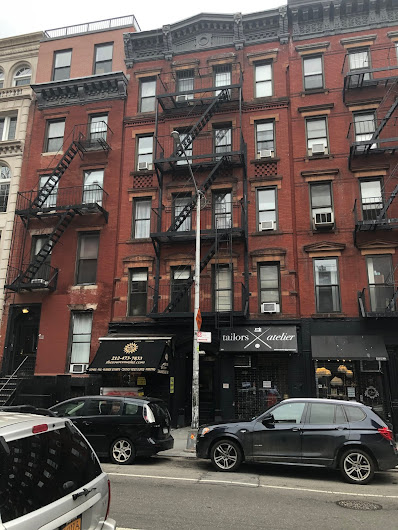 ICYMI: Tenants at 331 E. Ninth St. between First Avenue and Second Avenue will not have to pay rent until their landlord, Kushner Companies, secures a certificate of occupancy for the building.

Details via The Real Deal:

Residents of the building at 331 East 9th Street will also be allowed to stay in their apartments without paying any back rent, according to the decision that State Supreme Court Judge Frances Ortiz handed down ...

The nine-unit East Village property is one of several that Housing Rights Initiative and Bronx Councilmember Ritchie Torres announced Kushner was operating illegally at a press conference last March.

Ortiz agreed with this in his ruling, writing that “the addition of an entire floor on the top of the building constitutes a substantial alteration, thereby requiring petitioners to obtain a C of O for the entire building.” He added that “no rent is collectible by the petitioner [Kushner] when a building lacks a valid certificate of occupancy.”

The real estate company never received a permanent certificate of occupancy because of building code violations, according to HRI. The housing watchdog group helped the building’s tenants organize and refuse to pay rent.

Kushner Cos. COO Peter Febo said the the judge's ruling was wrong. They plan on appealing once courts reopen after the coronavirus crisis.

The Kushners started buying up East Village buildings in early 2013.
Posted by Grieve at 6:00 AM

And we all know that Kushner is the Orange Death’s son-in-law...

A really good backgrounder and lots of context is in the series "Dirty Money"; Season Two Episode 3 "Slumlord Millionaire" on Netflix. I just watched a couple days ago. Features East Village.

May the tenants prevail.

good.
one, no two things Real Deal; Judge Frances Ortiz is a lady Judge, in Housing Court- not Supreme, unless she's moonlighting.

@Jill I was just going to mention that documentary!

Wow this is great!!
Very happy for the tenants who made this happen.

I’m hoping to get some advice from the tenants who live in that building/ anyone else who might be able to help:
I also live on this block of 9th street, a few doors down, and my apartment faces the back of the building.
One of the tenants of 331 has a back patio and every time it’s warm out they absolutely BLAST their music starting around 2pm and going till around 3am. I totally get enjoying that space but having their music so loud is incredibly disrespectful to everyone else. I feel like I have to leave my apartment whenever they're out there partying because the noise is so miserable.
I’ve asked them to turn it down and they’ve ignored me.

Does anyone have the contact info for the property manager at 331 east 9th or someone else I can talk to about getting them to be more respectful?
I’m not sure who to talk to.
Any advice is much appreciated!!

To the anonymous 9th street neighbor upset about the noise, slumlord Jared has a storefront office on east 12th street between avenue A & B. It's Westminster Management . You will get nowhere with them. They only respond when collecting rent checks. Good luck.

@9th street neighbor, I had that issue with a bunch of frat boys who took over a garden apartment 30 feet from my bedroom and had almost nightly raucous beer pong parties or bbq's with music, screaming, cheering and wooing, etc. Take photos with time and date stamp, make videos with same, and take them to the Ninth Precinct Community Council meetings when they resume. My complaint was taken so seriously by the Community Affairs officer that he kept going by the apt. for weeks until he found the perps at home, sat them down and talked to them, and the noise level got much, much better. Also, ask the managing agent of your building to write a letter to Kushner's people, mentioned the warrant of habitability clause that ensures you are allowed to enjoy your apt. in peace and quiet. Start a petition and get people in your building and surrounding buildings who are also bothered to sign it and take it to a CB#3 Housing Committee meeting, again when they are up and running, and ask them and the full board to get involved. You have more options than leaving your space for half a day at a time, and you should not have to! Good luck.

thank you so much- these were all really helpful!!

Friend lives in said building long time tenant. Kushner took 1 floor and made a mega Nyu apt with god knows how many bedrooms. For what it’s worth I doubt the give a f about the neighbors ( Kushner) but good luck!